Start of "Media Dialogue 2020 for Pluralism and Understanding" 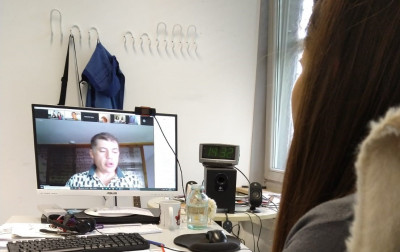 Due to quarantine restrictions and the epidemiological situation in the world, the first seminar of Media Dialogue 2020 for Pluralism and Understanding has started online. It is devoted to discussing the influence of the coronavirus crisis and the current situation of media systems in Ukraine, Armenia, and Moldova.

At the beginning of the online seminar on August 31, project organizer Dr. Wolfgang Ressmann welcomed all participants and introduced the project to them. After that, representatives from the participating countries spoke about the impact of Covid-19 on the media, changes in the information space, and problems caused by the coronavirus.

First Deputy Head of the National Union of Journalists of Ukraine Lina Kushch noted that the coronavirus crisis not only led to difficulties (spreading fake news, personal danger to infect for journalists, reducing the salaries of media workers, etc.) but also reminded people of the value of traditional media. She also expressed support for Belarusian journalists and said that more than 100 newsrooms and journalists had already signed a statement of solidarity initiated by the NUJU.

Director of AKOS Cultural NGO Mkrtich Tonoyan reported on the serious situation of the rapid spread of coronavirus in Armenia, the problem of spreading fake news, and escalating armed conflict on the border with Azerbaijan.

Journalist and media researcher Konstantin Uzdriş spoke about the strong influence of the authorities on the Moldovan media system, as well as he gave examples of misinformation and pro-Russian propaganda. For instance, fake news that the coronavirus does not exist, 5G networks spread the virus or the vaccine kills people, and so on.

During the breakout conversations, project participants had the opportunity to discuss the current issues in small groups. As a result, they highlighted the most important problems in the media systems of Ukraine, Armenia, and Moldova as well as suggested possible ways to solve them.

At the end of the seminar, the organizers and participants of the project watched two videos from Belarus and expressed their support to people and media workers.

This knowledge and experience will be part of future media projects of the three working groups (audio, documentation, and video). The media products will be published on the Ukrainian website http://infocenter.com.ua/, on the YouTube channel (https://bit.ly/3g1SKyE) as well as on Facebook and Instagram. In this way, project participants will have the opportunity to address the respective issues through their own media productions.

The second online seminar will take place on September 10 and will focus on the current developments in Belarus, Georgia, as well as the media situation in Germany.