From an apartment to one of the biggest TV channels 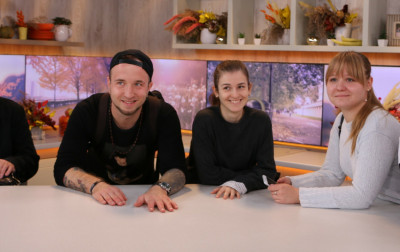 The Voice of Ukraine? Check. Dancing with the Stars? Check. A breakfast show? Check. The channel 1+1 has a famous entertainment program. But it also broadcasts news and political shows. That is why participants of the project visited the channel’s office.

The channel was founded in 1995 and even though the office space was a small three room apartment it quickly became influential in the Ukrainian TV industry. Nowadays it has expanded its working space to three big buildings. The Channel has a large variety of TV programs including the Voice of Ukraine, the Breakfast with 1+1 which is a morning show, Dancing with the Stars etc.

But the most important one is TSN which is a daily News program from 6 in the morning until midnight 9 times a day with a duration from 15 to 50 minutes. The journalists and editors are working daily to analyze, edit and sometimes translate the interesting and important news to inform their audience. Although the company of 1+1 has two thousand employees, four hundred of them are working in TSN. Moreover four people in each region of Ukraine stay in the regional news centers to inform about regional news in live stream. In fact, it is a very convenient way to get the society informed and it saves time and resources because it is not necessary to transport journalists from the capital city to the region.

The TSN office is divided into two colors red and blue which is a symbol of their company’s flag. From Monday to Saturday the red line is working on morning news and the blue line is working on evening news and analysis of the week on Sunday are also in the blue line. As there are millions of pieces of information everyday around the world it is definitely impossible to announce everyone on media, so the channel created their website where the users can search for the news they are interested in.
The website is is fully adopted to disabled people: there is a special button for audio news for visually impaired people and live stream translation on the gesture language for hearing impaired people. It is very important for the channel that every member of society has the possibility to read news and stay informed. Because this is essential for democracy.

The studios are fully equipped with modern technique. Here you can even find innovative robot camera which does not need to be programmed. The morning show studio is recognized to be one of the most modern studios with one of the biggest screens in Europe. 1+1 is translating many licenses bought programs and soap operas. In fact, the channel was the first in Ukraine to translate and show the soap opera Chernobyl by HBO.

This channel is a great example of how hard work pays off and success is only about quality but not quantity. Even when they owned only three rooms their dedication brought them the name of one of the most successful and famous TV channels of Ukraine.