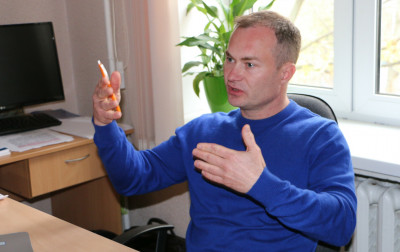 Many journalists need to be brave people – sometimes they even risk their lives to give the society the information it needs. Their job gets even more dangerous during war times. That is why the journalists of OstroV News Agency moved from Donbass region to Kiev in 2014.

We were interested in their work and went to meet them in their office in Kyiv.
OstroV was founded in 2002 in Donbass. The news agency ismainly writing about the conflict and the overall situation in this region.

The website has approximately twenty thousand daily visitors. Although OstroV is banned in Russia and Kazakhstan they still have readers from these countries with the help of various social networks and VPN connections.

OstroV actively fights fake news and cliche ideologies. They get financed by grants but since they moved to Kyiv after the war, it was hard to find financial support as not everyone agreed with the idea that this war was not a Ukrainian inside conflict.

Another big problem besides various fake news are constant trials of political parties to manipulate the public opinion in Ukraine. For example, they do it with the help of social experiments about topics like special status of occupied territories by forming manipulative questions and then they get the answers that they need. The journalists of OstroV do not approve giving an autonomy or special status to the occupied territories because they think that it is not a solution. The autonomy is also not approved by OstroV’s readers - about 60% of the participants were against it in the questioner on the site of OstroV.

Sometimes people write to OstroV journalists not to touch the topics of conflicts in Ukraine but the journalists know that these messages are not from ordinary citizens.
However, it is not that easy to intimidate as brave people as journalists.