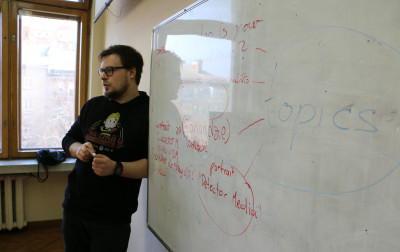 Ready, set – and go! The groups started to work in the project Media Dialogue for Democracy and Peace.

There are four groups: two video groups, the debate group and the blog group.

The participants of the video groups discussed the topics that they want to present in their short videos. They will split into two groups and produce two movies with different topics.
The theme of one of the video group will be pressure on the journalists from state authorities. The group wants to find out how the situation regarding the pressure on journalists has changed in the last twenty years.
The second video group will focus on data collection in media. They want to find out how media outlets working with data and how they are collecting it. For this they will visit Detector Media, an organization that monitors and analyzes media outlets in Ukraine. There they want to make some interviews and film their work.
Before the start recording they will make a concept for their reports and write down some questions. Then the trainers will give an introduction into how to use the technical equipment. They will also teach some basics of theory of filming. Then the groups are ready and will start to film and to interview people and some experts.

The debate group discusses generally the role of media in modern conflicts. The first day they have started with brainstorming and collecting their ideas related to the topic. They are going to speak with the participants from Armenia, Georgia and Ukraine and collect their thoughts about the media’s roll in their countries and how it works in boycotts and protests. The participants of this group will introduce the causes and consequences of misinformation like fake news or biased news. Then they will present issues about coverage of conflicts. In the end, they will present some solutions how to use media for bringing peace and conflict reconciliation.

The blog group discussed firstly what a good article needs. The participants exchanged their ideas on this question and had a look at some examples. They also learned what to pay attention to at taking photos. The group’s members told their ideas for the blog and then they started to work on three different articles: about the opening meeting, about the project’s participants and of course on this article.

At the same time the organizers meet local media and NGOs. They discuss there the situation of media in Ukraine but also compare it with the situation in Belarus, Georgia and Armenia. There are many similar challenges in these countries, so it makes sense to discuss these. And of course they also exchange about how to face these challenge. At the same time the project builds a network of different media organizations in different countries.
On the first day the project’s organizers already had a meeting with Tetyana Lebedyeva, member of the Ukrainian Media Ethics Council, Oleksii Pogorelov, president of the Ukrainian Media Business Association and Iryna Vyrtosu from ZMINA - Human Rights Center.