The Opening Meeting in Kyiv 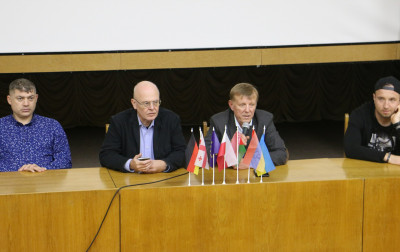 Autumn in Kyiv is just like in fairy tales. Everything is covered by yellow, orange and red leaves and the trees are touching the sky. The capital city of Ukraine exceeded expectations – it truly is the second foggiest city in the world after London.

Kyiv is a special city and it was a special day as well. On October 21st 2019 the final stage of the project Media Dialogue for Democracy and Peace was opened officially in the Institute of Journalism of Taras Shevchenko National University of Kyiv.

Traditionally, we had the opening speeches of the organizers: Yevhen Tsymbalenko, the Deputy Director for Scientific and Pedagogical Work of the Institute of Journalism; Wolfgang Ressmann, chairman of the Association of Citizen Media of Germany; Volodymyr Danyluk, chairman of the Forum of Ukrainian Journalists; Mkrtich Tonoyan ACOS Cultural NGO; Mikita Pastuhou, representative of Belorussian Journalist’s Association.
Yevhen Tsymbalenko opened the meeting and welcomed everyone in the name of the institute and the university. Wolfgang Ressmann talked about how dynamic the political and social situations are in so called Eastern partnership countries like Georgia, Ukraine and Armenia. He mentioned that the situation of media literacy and freedom of speech is changing as well and so are the governments. Volodymyr Danyluk summarized the project and its results so far. He talked about the previous stages on Lutsk, Ukraine and Tbilisi, Georgia and Yerevan, Armenia. Mkrtich Tonoyan also talked about how much we have done in this amazing project and what a great opportunity it was to meet such different people from different countries. He also underlined that the project also establishes a network for people working with media and NGOs. And last but not least, Mikita Pastuhou gave the organizers and the participants a credit for a great work done so far and we applauded each other.

Then the participants briefly introduced themselves. They said where they are from, what they study and also what they expect from this project. Everyone was excited to be a part of the project again and the participants from previous stages met new ones from Ukraine as well.

After that the trainers of the groups presented what they are going to work on during this week. This time there are four groups. The two video groups are going to make reports about the situation of media in Ukraine. The debate group will discuss the problems connected to conflict zones and different kinds of media that are reporting about them. The blog group writes about what other groups are working on and describing this process itself. They also accompany the organizers on the meetings they have with local media and NGOs.

The participants started working on their projects. The day ended with the delicious dinner and warm conversations.