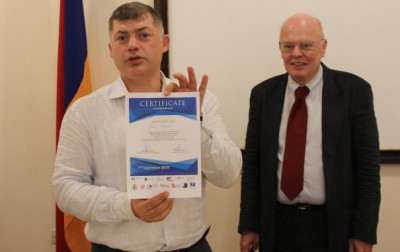 Ten days in two countries. Ten days in Caucasus. The second stage of the project Media Dialogue for Democracy and Peace took place in Tbilisi, Georgia and in Yerevan, Armenia. At the end of the stage there was the ending conference in Yerevan.

Mkrtich Tonoyan, the director of ACOSS Cultural NGO, hold the welcome speech. He summarized the four days that were spent in Tbilisi and the six days that were spent in Yerevan. He said that for him the connections that were built until now have much value – on the professional but also on the personal level. For him it is also very important that the project brings together not only journalists but also journalists.

Volodymyr Danyluk, chairman of the Forum of Ukrainian Journalists, spoke about the importance of good journalism especially while war. It is necessary to have quality journalism that tries to be as objective as possible while contributing to peace-making. He referred to the similarities in Ukraine, Georgia and Armenia: all three countries are involved in armed conflicts and according to this a difficult media situation.

The next speaker was Kateryna Sokolova from the Institute of Journalism of Taras Shevchenko National University of Kyiv. She presented the concept of ‘journalism of attachment’. This concept approves that journalists built an emotional connection to the topic they write about by being attached to the affected people. The journalist should have empathy to report about the topic – ‘without empathy no social journalism’.

Ketevan Kanteladze made a historical presentation about the relations of Georgia and Armenia with the Russian Federation concerning armed conflicts. She talked about Abkhazia, South Ossetia and Nagorno Karabakh.

Wolfgang Ressmann, chairman of the Association of Citizen Media of Germany, talked about the lasting connections that resulted from the previous projects and this one. Every time there were new connections established that widen the network and that can really be used. It is also an aim to deepen these connections in the future. He was also happy to see that the project’s focus does not get lost: ‘Dialogue is the way to solve conflicts. It should never happen again that we are divided like in the Cold War period.’

Then the working groups presented their results.
First was the blog group. They let the audience have a look at their blog and explained how they worked on it. From taking notes and photos, over writing to uploading and editing. They also explained how they use social media to promote their content.
The video groups also presented the videos they produced over the last days in Yerevan. They interviewed the commander at the military position at the Azerbaijani border we have visited. In Yerevan they made an interview with a war journalist to find out more about the challenges in reporting about armed conflicts. Their videos will be posted on this blog when they are uploaded on YouTube.
The last group was the debate group. They have prepared short speeches that they recorded on video. They took the hashtag #prayforukraine and said in their videos that it is not enough to pray only. Citizens have to be politically active to achieve political change. You can see the videos on the project’s facebook page. 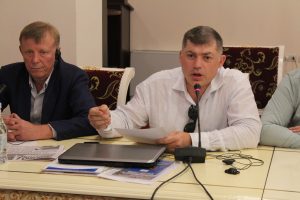 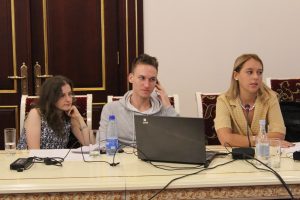 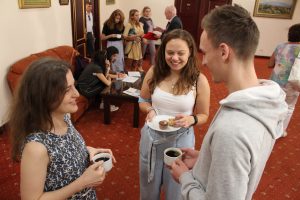 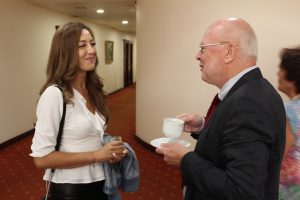 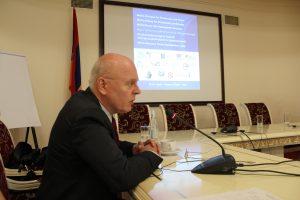 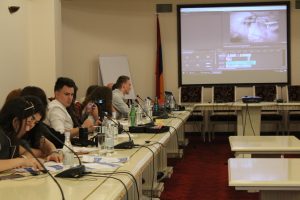