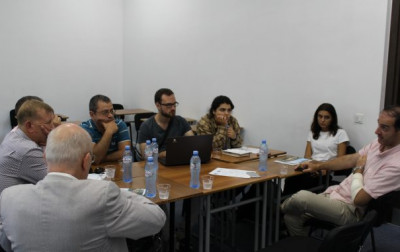 The project‘s organizers sat together and discussed the political and media situation in Georgia. Mamuka Andguladze provided a brief overwiev of the politcial changes in Georgia in the last years and the developement of the media landscape.

For example, he mentioned that Georgia is not anymore a presidential but a parliamentary republic. The president‘s power is less than before but the symbolic power is still big. Many people overestimate the president‘s political influence.

Mamuka Andguladze explained TV is still the most powerful source of news. But online media get more and more important because many people in Georgia use it on a daily basis to inform themselves about politics. As he mentioned, there are some problems with online media – such as bots, fake news and hatespeech.
Bots are fake accounts that are active on social media and share and comment on political topics. They are used to influence the discourse.
Another problem of online media is fake news. That means that disinformation is used on purpose. Fake news make it difficult for media users to distiguish true from false information.
The third big problem is hatespeech. That means that politicians, journalists, social groups or participants in political debates get insulted in online media.

The representatives from Armenia and Ukraine saw parallels between the situation of Georgian media an the media in their countries. They are also confronted by fake news and hatespeech. The participants of the organizations exchanged their experiences with these challenges and will discuss more about the topic in the following days of the project.