Opening of “Media Dialogue for Democracy and Peace” 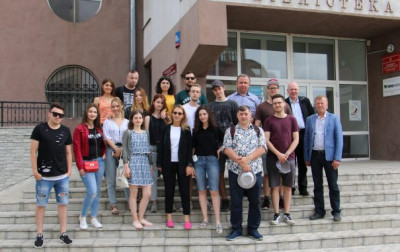 Five countries – one project! The title is Media Dialogue for Democracy and Peace and it connects people working with media and students of journalism from the countries Ukraine, Georgia, Armenia, Belarus and Germany. Media Dialogue for Democracy and Peace builds on the results of the project Changes in Media Education and Political Dialogue Perspectives. This project took place in Ukraine and Armenia in 2018 and it was funded by the Federal Foreign Office of Germany. There the participants exchanged their experiences with media in their countries and they discussed topics like media and armed conflicts and the freedom of press in Armenia after the Velvet Revolution. There were also new contacts established with people working in media, media organizations, NGOs and so on.

The Federal Foreign Office of Germany decided to continue supporting this work. Now the organizers of last year‘s project meet in Lutsk, Western Ukraine for the new project Media Dialogue for Democracy and Peace.
This year there are participants from Ukraine, Armenia, Georgia, Belarus and Germany. The Ukrainian participants are from Lutsk, Kyiv, Odesa and Kramatorsk, Donbass.
The opening conference of the project took place in the Lesya Ukrainka Eastern European National University in Lutsk. Volodymyr Danyluk welcomed the participants. He is the chief editor of the newspaper Volyn News and he is the chairman of the Forum of Ukrainian Journalists.
Wolfgang Ressmann introduced into the content of the program. He is the chairman of the Association of Citizen Media of Germany. He gave a summary of the previous project and he shared his vision about the new project: he wants to widen the network, bring more perspectives into the exchange, go deeper into the analysis of the challenges for media in the participating countries and reach more people working with media with the results of the project.
Yurii Hromyk, the decan of the Faculty of Philology and Journalism, welcomed the guests in his faculty and emphasized how happy he is to host the project.
There was also a special guest at the opening conference: Annette Pölking, the First Secretary of the German Consulate in Kyiv. She said that she is surprised by the diverse connections that were established over the last years and she underlined the importance of this kind of political education.

After the introduction there were created diffrent groups: three video groups, a debate group and a documentation group. The participants had the opportunity to choose their interest fields and devide into groups accoding to their preferences.

After the opening conference the participants split into groups and started to work. Later they went to the city center of Lutsk with a local guide to learn more about local culture and the main sights. We will report about that trip in the next post. 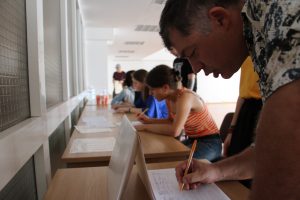 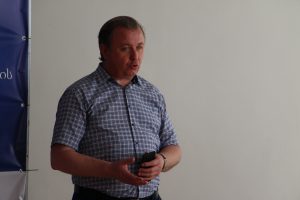 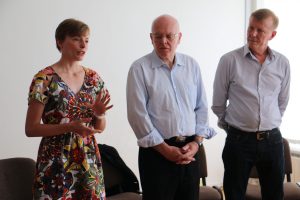 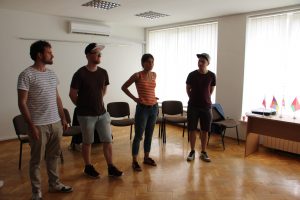