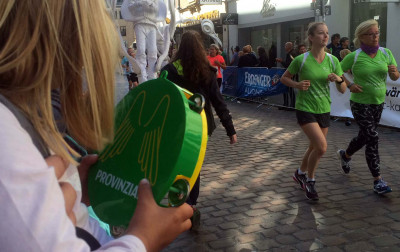 "We are marathon" under this slogan Münster-Marathon eV organized a marathon with 42.195 kilometers on September 10, 2017. It is already 16 years of the Münster Marathon since it started in 2002.

“It’s going to be hard but hard is not impossible”

I just woke up on Sunday, still the weekend. And asking myself what I’m going to do today? I barely know Munster now. Let’s start walking and running around and go back to prepare for my whole week, doing my home duties or this what I claimed to just come back to my own new bubble!
So, it will be a walk for just half an hour or an hour maximum.
Take little things with me, phone, headphones, small amount of money, bus ticket (in case I lose the directions) and the keys for my own bubble. I didn’t even take my bag this time. I wanted to be light and free as much as I can from the things I could take.
Just putting all those little things in my pocket and go on.

Which direction will I take? Actually it doesn’t matter that much as the whole city is beautiful and I trust my feet, every time they take me to a new direction of my destiny.


And here we are discovering that there is a bridge close to my apartment and I love bridges. It always reminds me of connecting two far away things. I keep walking till I find myself in the old city. It’s one of my favorite places here, the old architecture, the stoned road and I always think it has been reconstructed like this after World War II.

I walked till I found many of metal safety barriers, many people around the place, music and sound system and some people who looked like they came from a long exhausting distance and like other people around the barriers who looked like they are waiting for the first ones or just watching. I don’t know exactly. I forgot about my walk a little bit and had some curiosity what is this about. I stopped there trying to figure out by myself but I can’t make sure if it is just a sport event or something else . I tried to ask the old woman beside me but she couldn’t speak English. I moved to walk through narrow lanes to come closer. Maybe from that place those exhausted people are coming. I walked and walked and asked again a young girl who could barely speak English to tell me with sporadic words “Marathon, 42 km”. Now I know what I’m looking at, ok it looks interesting and I’ve never watched a marathon before. Let’s change my plan and stay a little bit longer to watch it.

Individuals, couples and groups participated in the Marathon and here they came to the end point where others were waiting for them. Some of them were clapping, some of them were warring but it’s like all people came to “support”. Actually me too. At the begging I just stayed to watch and observe the event but then while every participant came to the end, I found myself smiling towards them, sometimes enthusiasticly clapping a little bit, and sometimes even if I don’t know any of those people, who look so tired and weak but also so strong to fight themselves and continue to the end, I found myself warring about them to smash before they arrive to what they want.
This little girl who participated with her mother was so close to the ending point and her body was fighting with vomiting and her mom never stopped encouraging her and never told her to quit! The medical support came and I was sure that they will take her but they just came to make sure that the girl is OK and maybe to make her feel safe that they are here.
I walked again to come closer and maybe find another inspirational stories and I found an old man holding the metal barrier who was just waiting without being bored.
Kids holding cute instruments to express their support which encouraged their parents or families.

And there was a whole family who was waiting at the beginning of the reception line. I found worried parents on the other side who were holding a cheering sign. I asked the little woman who was beside me about them because it seemed that they were supporting and waiting for the same person. And she told me that they are waiting for their daughter who is participating for the first time and she is also waiting for her with her sleeping baby and also other family members.
Time passing and it seem like most of participants arrived, warring has been increased in this family’s eyes especially the parents but it seemed that they have never lost their believes in this girl.
I became more curious to wait for this girl even if the event seemd like has already finished.
Suddenly I found one of those family members holding two little girls and making them jump over the barrier to walk with the expected girl the rest of the way. Yes she came. I took a look to the parents to find the mother crying and the father holding the sign, the whole family showing their all support and proudness of her.

On my way back to the place where I live I kept thinking and actually believing that we all need people who believe in us, waiting, supporting and showing their support in another kind of marathons that have more obstacles and ups and downs, The Marathon of life.