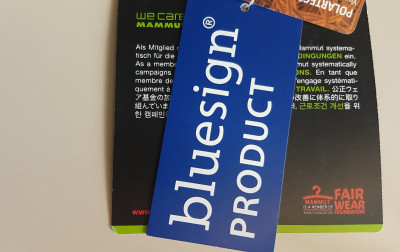 The number of organic cotton farms is growing. The same as the number of bio and fair-trade clothes labels and manufactures. Nevertheless, the awarness of the consumers is still low. Clothes companies tempt consumers to their rich offer of colours, models and functionality and avalibility. The prices are not high, actually they are as low as never before. At this point it is crucial to not ask yourself how much does it cost, but for what price we expose ourselves and the health of others. At any cost?

Red, orange, blue, turquoise, black; waterproof, no ironing, stains resistant – those and many more features of clothes are offered basically in each shop. Unfortunatelly, all of those functions or deep colours need a big amount of chemicals. And those, we wear each day directly on our skin. Maybe they are pretty but for sure they are produced in an ugly way. The pesticides in our clothes cause serious consequences not only in our health but also they leave marks on people who have produced the clothes. We wear the chemicals which we buy, they inhale them during the process of production. That is why it is important that our clothes will be not only oganic but also fair trade.

It appears that in case of fire, most of the clothes availabe on the market would not burn but melt! It is all because of the plastic which the clothes contain. And this on the other hand influences the environment. The study of Release of Synthetic Microplastic Plastic Fibres From Domestic Washing Machines shows that: „More than 700,000 microscopic fibres could be released into waste water during each use of a domestic washing machine, with many of them likely to pass through sewage treatment and into the environment, according to new research“. And what is more: „Marine litter is a global environmental problem with items of debris now contaminating habitats from the poles to the equator, from the sea surface to the deep sea. This litter has negative consequences for wildlife, for economies and on human health. Over 700 species, including commercially important fish and shellfish are known to encounter marine litter in the environment“ (source: https://www.plymouth.ac.uk/news/washing-clothes-releases-thousands-of-microplastic-particles-into-environment-study-shows).

Exactly the same problem is present in clothes inductry. Higher prices or reputation should not be the determinants. It appears that even the products of those reputable brands like Zara or Tommy Hilfiger contain the same amount of chemicals and the workers from the production halls are put at risk of carcinogenic vapors used and in the same way like in cheap, not reputable clothes brands. Since a while already, Greenpeace is looking into this matter and confirms the negligence of the salesmen. Detox campaign focuses on decreasing the amount of chemicals used in the clothes: „Greenpeace is campaigning to stop industry poisoning our water with hazardous, persistent and hormone-disrupting chemicals. The Detox campaign challenges top brands to make amends by working with their suppliers to eliminate all hazardous chemicals across their entire supply chain, and the entire life-cycle of their products“ (source: http://www.greenpeace.org/international/en/campaigns/detox/fashion/about/eleven-flagship-hazardous-chemicals/)

Even if the awarness among the consumers is still low, the number of organic cotton farms is growing: „After seeing a 10 percent rise in production of organic cotton last year, 2014/15 saw a slight downturn of 3.8 percent. However, production looks set to increase again in 2017/18 when a number of in-conversion programs in India reach certification. In total there are currently 19 countries growing organic cotton, though the top five growing countries (India, China, Turkey, Kyrgyzstan and USA) account for more than 92% of production. India alone accounts for 67%“ (source http://aboutorganiccotton.org/stats/). The benefits are huge. Consumers, producers, workers, environment – all of them profit. The pollution is lower and people don’t risk their health. It appears that it takes much time to transform a standard farm into the bio one. And this shows how serious and strong the influance of the pesticides can be: „It takes three years for conventional farmers to convert their land to certified organic. That’s how long it takes to clear the soil of its chemicals and pesticides“ (source: http://aboutorganiccotton.org/stats/).

There are also many advice which can be used by the consumers to avoid chemicals in clothes and act in a fair way. It is important to: wash new clothes before wearing them, wear clothes till they will worn-out, reduce the number of new clothes, try to buy bio clothes or at least in the second hand shop, wash just when the washing mashine is full, wash in 30 degrees and reduce the amount of washing powder – the best would be the ecological one.

Nowadays, many sturt ups are connected to the bio and fair trade fasion. Young producers think about the consequences of their actions. They want to be fair – not only to the environment or to the consumers but also to themselves. The best example of these kind of entrepreneurs are well known Manomama from Germany or Slogan from Poland. They offer clothes which are made from organic cotton and produced mostly locally. „We can not change the world but we can make it each day a bit better“ – admits Sina Trinkwalder, the owner of Manomama.

Worth mentioning are also initiatives of young fasion designers who choose to produce fair. Being noticed in fashion market is not easy. Being accepted and chosen with stuff which is bio – so more expensive and rare – even more difficult. However, there are those who take the risk and start the challenge. Laura Hesse from Dortmund has recently opened her company Basic Ape – she sells clothes which are bio and trade – what“s more very fashionable. Asked why she has chosen more difficult way to make her fashion dream come true, Laura answered without any hesistation: „We can’t really imagine to make a fashion label that doesn’t meet the standards. We want to pull the fashion brake, being well dressed in a fair way, to feel good ethically and to slow fast fashion“.

The example of Max Hafemann – a student from Germany shows that everyone can change and influance the problem: „Even if I am a student and I don't have much money I think that responsibility isn't a matter of money, it is a matter of humanity. We need to understand that everything we buy, every single shirt has an impact to someone else‘s life, who lives most probably in much worse conditions than we do. And we ground our material wealth on the poorness and the health of other people. Clothes need to be comfortable and cover us in a nice way. If we let other people suffer and become deathly ill because we need the last fashion than we should overthink our priorities“.

There are many pieces of advice which the consumer can or should follow. We just simply preffer to buy 5 T-Shirts for 10 euro each, than 1 for 50. Thanks to this, we don’t have to decide about one colour and we can throw it, when it will starts to be boring. There are some new – better ones! Unfortunatelly, this way of thinking is wrong. We follow the fashion blindly. We let ourselves to be fooled by low price, which is only a marketing trick. We think that the companies destroy the environment and the health of their employees and the problem is not ours. As a matter of fact we are the ones who are paying them…