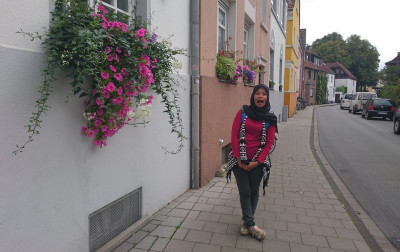 Dalai Lama said: once a year go some place you’ve never been before. Two days ago, I has arrived to the place I never imagined before. Bingo!

My name is Tiara Fatimah. An Indonesian. An Acehnesse. A young living woman who has started career as media person since being 19. I still remember the first day I was overwhelmed to the joy after being accepted as an announcer at a radio station. I love talking, listening to music and playing it for people. Those excitements took me to this position.

I spent more than 6 years as a radio person, I challenged myself to take another steps. So I decide to try my luck in journalism as journalist. This opportunity got me. Now, I also work for multimedia department at Harian Serambi Indonesia, the biggest media company in Banda Aceh.

I have some responsibiities to do as my jobdesk. I have to sort the news. Sorting the news and editing the errors are not easy. It takes my eyes attached to the screen and I don’t even know if I would still be able to see without my glassess in 50.

Putting the proper title, checking the structure, providing the real news, avoiding the hoax and other is the stuff I have to handle. People can read the news mostly from our province through this site www.serambinews.com. The contents are mostly local news and various issues from international, lifestyle, health, etc.

After those tiring days, I feel like I need to recharge, need new knowledge and experiences to support my work. So I decided to take an internship programme. One of my friend who is the alumni of IFA offer me this chance. The lights started bulbing. I need to take this chance. So I applied for this program in January 2017. While waiting, I got married to my boyfriend whom I have been dating for 6 years.

In my leisure time, I am also involved in youth organization “The Leader”, which is focused on developing the potential of young people in our province. As we know Aceh was complicated. We were violated by war for so long and destroyed by Tsunami in 2004. So it wasn’t only infrastructure or families were gone but also hopes. Especially for those who lived in remote places in Aceh. Through some projects, we try to help and do what we can to spread the spirit and prepare them to have new hope and fight for that.

A month after my marriage, on April 24, IFA emailed me. The first word was Congratulations! I don’t know how to explain it but as I know visiting Germany is on my wishlist and universe support me to this chance.

But, going to Germany is not a piece of cake. I had to deal with 22 flight hours with two changes and catching the train like less than 3 hours to Munster. That was the longest trip I have ever had.

The challenges are not only those. As a tropical person who lived since forever with 30 degree celcius, I have to get used to the cold. As an Indonesian, I know I will get “masuk angin” often. “Masuk angin” is the feeling when you feel like fever but you are not and always want to vomit.

Another challenge is food!! I often eat spicy curry, oily, and some stuff that only my mom can cook. I am bad at cooking. But don’t worry, I can survive.

I will stay in Munster for almost 3 months and will be an intern at Youth4media, a super cool office next to the channel and so many trees around. I know I would love it so much.