The journey "Searching for a treasure" 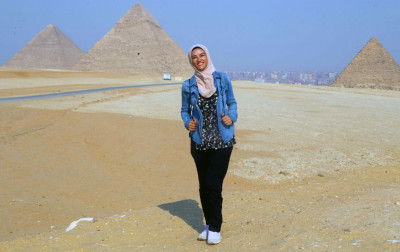 “Each human being has his own personal legend to be fulfilled in the world” The Alchemist- Paulo Coelho, 1988.

I've always looked at my life as a journey - mental, spiritual, emotional and learning journey. It started from the day I was born and still don't know the end point.

A novel that I’m certainly the protagonist of it, But also with other main and secondary characters. Every chapter lead to the next and it will be hard to absorb right if you just read one.

I've always believed that every single thing happened in my life affected shaping my personality but there was some special stations. It started exactly after I was born as I travelled with my family to another country - Kuwait, which was the country of my father's job. I grew up in a diverse community with people from different nationalities and cultures which made me appreciated the differences between people and I loved to deal with it. When I was seven years old my first turning point came. My father died. Then we went back to our country and had a new school, new friends and new life generally. And there it was the first time to know the meaning of loss and adaptation.

“We are afraid of losing what we have, whether it's our life or our possessions and property. But this fear evaporates when we understand that our life stories and the history of the world were written by the same one”

Then a new chapter began - moving back to Egypt with normal stable life passing by formal education, informal courses and activities in art and sports.

Then life went passing with trials to get more about it but the vision was kind of blurry. And it came the time of first decisions when you were asked to take the lead of your life. It’s time to decide what I want to study? What I learned in making decisions is that you always have a choice even giving up is a decision we take by ourselves but usually we blame the circumstances that I do believe absolutely affect us. Yet, we usually have options!

I started to study mass communications because I was fascinated by expressing and also reaching my voice and other’s and with creativity putting a spot light on what I wanted. Things didn’t went like I imagined but decided to continue. After graduation in 2010 I heard about new world which I decided to explore - voluntary work and there I found another “turning point”. That made a big influence on my whole life. Varity of experiences and people with different personalities. It changed my view of life - more responsibilities, social awareness and the meaning of giving.

“There is only one way to learn. It's through action”

This brand new life made me learn a lot by experiencing different things and every time I participated in something it made me know more about myself and also exploring my interests in many fields and got many skills. I got involved into community service and volunteer work regularly for more than 6 years ago with different organizations and teams.

Photography was a special chapter in my life that I have to mention. At the beginning I took it from artistic and documenting side only but I discovered that it has a spiritual side.

I will never be exaggerating if I say that photography made me see better and made me more close to my believes.

My first stable career experience after doing a freelancing stuff was as an Educational media specialist at a school. It was so interesting to try to make children or young people think, express and being aware of themselves, Dream, Explore and learn till they find what they want by their own and to live for a reason. While you are trying to ask them to do this, you will find yourself learning how to do it first. And the best way to teach them how to open their souls and their hearts and minds for life is to believe in this first and doing it for yourself. “When every day seems the same, it is because we have stopped noticing the good things that appear in our lives”

It’s time to take some risks and moving forward.. After two years of working at school it will be not easy to quit but sometimes the hard thing and the right thing are the same.

I started a new job after less than one month of leaving the last one to be a coordinator for a project in the network of a local newspapers and web site in socially, economically and geographically marginalized areas in Egypt and an online portal to local news content produced by young journalists aged between 12 and 18 years old after they got a professional training in journalism, photography, writing and different media tools. My job is to manage and implement the project in my region and mentoring the young journalists during the process of producing a monthly newspaper and daily content news and articles in a web site. This job means that I have to stop for a while to seed the plants that I collected during the trip and reap the other ready crop to continue my journey.

"It's true: Life really is generous to those who pursue their personal legend"

Like a lot of people I've always dreamed to travel to some countries around the world, made a wish list for countries I wanted to visit, listening to people who got the chance to travel but I was not sure about the possibilities or how I will do that. As I do believe that my life goes insanely gradually - like what I said every step led to another just like a ladder - you have to take it step by step. I thought why I don't explore my city and villages which I have never sen before, then different places in my country and then with the logic of my journey the turn will come to the world.

Just like someone heard my thoughts and decided to make it come true and actually I do believe there was something... In 2012, I started moving from my comfort zone without completely realizing that I'm doing what I had wished for. Go here and there for volunteer work which had a big favour once and for making photography another or go learning new skills a little further. Till it's turn for the next step. And this time was given as a gift from destiny. September 2016, I travelled as a part from the organization I'm a volunteer in for exchange program for a project about refugees.

In this turning point I learned that experiencing something is completely different than hearing about it. And may information feed our minds but experiences feed our souls.

After I finished I found an old woman who could barely speak English telling me "what comes from the heart goes to the heart"!

"Don't be someone that searches, finds, and then run away. Remember that wherever your heart is, there will find your treasure"

Here I'm after one year from the last travel at the beginning of a new chapter more different, unique and full of variety of emotions knowing that there is a tax for such journeys, hoping to come closer of my treasure. Picture at 5-9-2017 on the first day of internship with IFA at Youth4media.

Main Photo was taken by Picture taken by: Omar Farid

Photo 3: Trying to do some oriental Egyptian baking. While we are passing by this home for awareness campaign about illiteracy, women were busy with baking day so we decided to participate with them while we were working. At small village in El-Minya City, Upper Egypt, 2012. Photo taken by Nahla El Gafawy

Photo 4: This picture was taken while we were preparing ailliteracy class. Photo taken by Shiry Mahmoud

Photo 5: This picture was taken while we were practicing for expedition in a desert as a supervisor at the duke of Edinburgh’s international award 2016. Photo taken by Mahmoud Seif

Photo 7 was taken by Islam Hamada

Photo 8: In this picture I am the representative of our group and talking about the experience in front of people from about five nationalities, different ages, languages, religions and believes. Trying to find a language that approach us from each other.

After I finished I found an old woman who could barely speak English telling me "what comes from the heart goes to the heart"! This photo was taken by Ahmad Amgad

Photo 9: Picture at 5-9-2017 on the first day of internship with IFA at Youth4media. Photo was taken by Tiara Fatimah