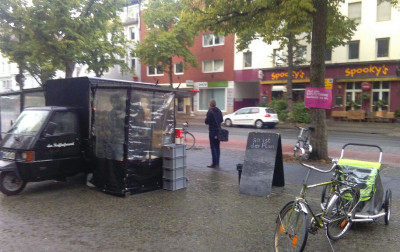 Most of us probably remember the characteristic sound of the truck selling ice-cream. It is not anymore usual to hear that, most probably because of the supermarkets’ industry, however, nowadays there are trucks which serve not only ice-cream but also food or better to say the whole dishes. Food truck industry has developed the last years. There are more and more places, especially in bigger cities, where it is possible to get some food from the truck. What is more, food trucks are even the topic of some TV programmes. Some of them present how to transform a car into a food truck, others show how the owners compete with each other.

The popularity of these kind of shows shouldn’t surprise. There are billions of people in the world who chose food from the trucks each day: „Thanks to its low cost and convenience, street food is consumed each day by an estimated 2.5 billion people world-wide. In Latin America, street food purchases account for up to 30 percent of urban household spending. In Bangkok, 20 000 street food vendors provide city residents with an estimated 40 percent of their overall energy intake. As well as being cheap, street foods can also be nutritious. A study in Calcutta, India, found that an average meal contained about 30 grams of protein, 15 grams of fat and 180 grams of carbohydrates”. (http://www.webcitation.org/6ZgB8eh79?url=http://www.fao.org/AG/magazine/0702sp1.htm)

The idea behind food truck industry is easy. You need to have a truck, which you can change into a food truck (installing some kitchen devices and a customer window). The next step is to get the permission for selling in particular places. What is also imoprtant is to fullfil all the hygienic standards, for which some documents are also needed. Of course, there should be a concept which kind of food to sell and were is the best place for it. And that is all. In contradiction to setting up a new restaurant it is way easier and faster. Additionaly, if there are not enough customers, there is always a possibility to change the place for a more convenient one.

In orther to learn about the roots of food trucks we should start with the creation of a chuck wagon. This story is considered to be the beginnings of food truck: „At the end of the U.S. civil war in the 1860's, a massive expansion of settlement moved westward across the North American continent. This expansion created a large market for beef. Beef that existed, on the hoof, in the southwest, primarily in Texas. Enterprising cattlemen recognized the need to move herds of cattle to market without railroads. This meant driving herds overland. The trail drive days were born. To move a herd of cattle overland meant crews of cowhands had to live in the open for months at a time. The need to feed and care for these mostly young men resulted in the development of the chuck wagon”. (http://americanchuckwagon.org/chuck-wagon-history.html)

In the past it was common to buy baking from the truck, which was arriving right in front of your house, especially in the countryside. But not many would think about buying the ready made dishes, which are served from the truck: „If the average person was told five years ago that she could nab a delicious and buttery lobster roll from a truck without getting food poisoning, she may have scoffed. Nowadays, chefs across the world are delivering some of the most scrumptious, affordable and delightfully fun food straight to the sidewalks — and social streams”. (http://mashable.com/2011/08/04/food-truck-history-infographic/#g3nz1ySD85q5)

In the times when economy started to tank, the food trucks grew. Expensive restaurants were not available for everyone (pirces, distance, timeconsuming, flexibility). Also the development of social media helped. The boom of posting photos of food supported the idea of street food. The trust for dishes served from the car increased. „Food trucks popped up in a perfect storm of low-cost marketing. Restaurants are extraordinarily expensive businesses to open and maintain. Food trucks, however, are far cheaper and carry far less risk. The barrier to entry is cheap, and the location can change daily (not selling well in Midtown? Move to Brooklyn or the Financial Districkt). (…) Not only were trucks striving for higher quality tastes, but they were talking to their customers, building what digital marketers call "brand loyalty." That brand loyalty also played into the food truck ethos of "community first." Each successful truck is a community unto itself. Social outreach helped to grow these communities and make them feel more participatory”. (http://mashable.com/2011/06/16/food-trucks-social-media/#bdqAiWHQxmqG)

Food truck, or bussiness on wheels can also be a failure. Not always it is possible to have the right place for your truck. Moreover, it is not possible to hire more emplyees, two people is maximum, more wouldn't be worth it. Also the weather can be crucial. And the chances for the highest income like: events, festivals, fests, etc. are not that often. But like in each business, there is always a risk.

Fast, accessable, cheap, delicious and from your neighbourhood - this is the new image of food from the truck. Even if tens years ago it was impossible even to think about it, today it is normal. The feeling of liking, or even loyalty have replaced the feeling of disgust. The idea of food trucks has been developing  and is becoming more and more popular. Who knows, how it is going to look like in some years…