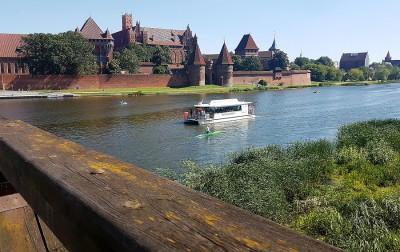 100 years period of time and between 30-50 mln of bricks were used to build this astonishing fortified Gothic building, which now would cost around 300mln zloty.

The Castle of the Teutonic Order in Malbork, Poland (Polish: Zamek Krzyżacki w Malborku) is a classic example of medieval fortress and is the largest castle in the world measured by land area (21-hectare site). Malbork Castle is one of Poland's official national Historic Monuments and in 1997 UNESCO designated it a World Heritage Site.

Photo: The Castle of the Teutonic Order in Malbork, Poland