The medieval fortress of Malbork 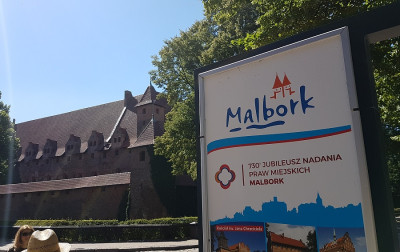 If you have never seen this castle, you have no idea how a real medieval fortress looks like! Located in the north of Poland, on the east bank of the River Nogat - WELCOME TO the medieval Castle of the Teutonic Order in Malbork, which is Poland's official national Historic Monuments and in 1997 UNESCO designated it a World Heritage Site.

100 years period of time and between 30-50 mln of bricks were used to build this astonishing fortified Gothic building, which now would cost around 300mln zloty. The Castle of the Teutonic Order in Malbork, Poland (Polish: Zamek Krzyżacki w Malborku) is a classic example of a medieval fortress and is the largest castle in the world measured by land area (21-hectare site). Undeniably, the construction of such a huge castle complex took a very long time. The necessary millions of bricks needed to be collected in order to built its thick and high walls. No army managed to overtake it. The gigant fortress guaranteed the security and continuity of the Teutonic State’s seat of power. However, what cannot be conquered, can be bought. A Polish king, Casimir IV Jagiellon, purchased the castle from the Teutonic mercenaries who were not paid by the Order. As a result the castle became a residence of the Polish king. After...

of course I could continue the fascinating story of the Teutonic Order - knights' battles, political games of the medieval times and the Gothic castles... To experience that extraordinary world, you need to find it by yourself - preferably surrounded by the brick walls of Malbork fortress! There is no better place for listening to the stories then there in the castle where you can still hear and feel the Middle Ages beauty..