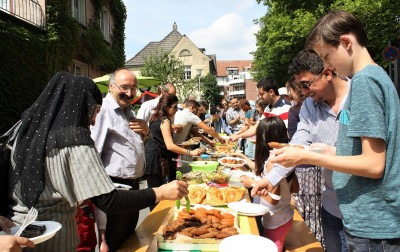 "Colourful Programme for young and old" under this motto the most important event of Aktion - Mein Stadteil project took place on 9th July 2017. Organised by Bürgerhaus Bennohaus - a citizen centre located in Münster, Germany; Sommerfest delighted participators who spent their sunny Sunday afternoon at Bennohaus.

For this day everyone was waiting impatiently; especially the youngest friends of Bennohaus. Since five years Münster's Citizen Centre located in the beautiful vicinity of the canal is offering wide range of activities during Sommerfest (eng. Summer Festival). This year it is directly connected with a new project run by the Bürgerhaus Bennohaus which main purpose is to develop an active and positive integration culture between migrants and the native inhabitants of Münster thanks to the regular dialogue and common activities. The project is supported by the Federal Office for Migration and Refugees.

This year's the programme of Sommerfest in Bennohaus was indeed bunt (eng. colourful)! The organizers prepared plenty of attractions. It all started at 11am with preparing a inflatable castle, QR codes ralley, and an ice cream car for all of which the children were waiting the most. And let's not forget about face painting and glitter tattooes spots which were the whole time full of youngsters waiting in queues. The parents and some older participants of Sommerfest could have enjoyed the flea market, a raffle and spots with barbeque, cakes and coffee. An interesting performance was given by a Duo Acrobatics who prepared a program which was a combination of acrobatics and a fire show. In the programme a greenscreen station has been offered for those who wanted to have photos for instance in the outerspace or on a tropical island.

The stage of Sommerfest was multicultural and never empty! Kurdish music of Samir Sfouk on the Oud, Persian melodies by Mehdi Sam, flute music by Maysam Jimaa Jamil and reggae rhythms brought by Kanga Vovo aka PatchoStar with the band "Munganga" could have been listened to. What's more a Bulgarian folk dance was performed by a children's dance group of a German-Bulgarian parent initiative (ger. der Deutsch-Bulgarischen Elterninitiative).

As in October 2016, Bennohaus launched Aktion - Mein Stadtteil project, The Chairman of The Integration Council of Münster (official project partner) - Dr. Ömer Lütfü Yavuz expressed his happiness concerning the long-term cooperation with Bürgerhaus Bennohaus. He also opened the international buffet with the words: "Everyone, whether immigrat or local, will find something for themselves". Everyone could have tried dishes from Arabic, Bulgarian, Polish, Russian, Spanish and Turkish cuisine. One of the participants of Sommerfest shared his opinion about the whole event:

"This event is something special because it's a family day where all the citizens of Münster can come and get to know each other better. You can see happy families, laughter and joy on children's faces and now also the international side of the city. The food was delicious! I am already waiting for the next Sommerfest organised by Bürgerhaus Bennohaus".