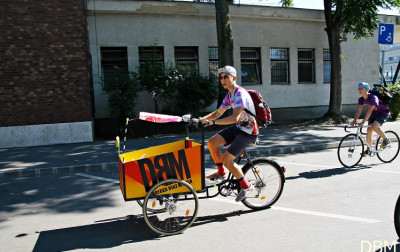 Imagine a group of bikers with the strong will to organise themselves as activists for the homeless of Hungary. What you get then, is the Debrecen Bike Maffia – and maybe a power of change in a country that’s stuck in helpless apathy towards its future.

Despite all this apathy, every second Saturday a vivid team of Debrecenians meets in order to prepare, cook, pack and deliver food and other basic goods to a large number of homeless people living in or around the city. It might sound simple, but DBM is far more than a bunch of bikers doing voluntary work. They show the very kind of civil engagement Hungary has lacked for the past decades.

So it all started in Budapest, on Christmas Eve 2011, a bunch of guys had so much leftovers from the festive menu, so they decided to give it to the ones, who had no food on the streets of Budapest. So they kept rolling with it, through the years. Now they grow a huge movement form this idea, with daily actions and more than 22 thousand followers on facebook, and Hundreds of volunteers.

Hungary is a country of harsh contrasts, especially between the urban centres and rural or urban periphery. For example, imagine a country thats people cannot communicate with its linguistic neighbourhood without a foreign language. Once this language was mostly Russian, due to the country’s Soviet history. But today it’s mainly English, which lots of Hungarians still are not able to speak properly.

Throughout its modern history Hungary has been a hot spot between East and West. After decades of dependence on the world powers’ global conflict, Hungarians were – and maybe aremore than ever - finally confronted with their own identity crisis. USSR times are long gone, but however: a still tangible relic of their totalitarian regime is that many Hungarians fell into passivity and are not being an active agent of change.

Nevertheless, this attitude slowly changes and especially young people get active: “Actually, this project is an adaptation, from Budapest, but we have some specialities in our city. So we created some new structure and project, and we invite young people as a volunteer to discover this social area”– explains Richard Damu, one of the main initiators of the group and active member of Debrecen’s youth- and NGO-network.

Richard’s DBM has got three main guidelines: 1) to promote the culture of cycling 2) to strengthen social sensitivity and solidarityand 3) to build a community of activists. The organization’s base of work is voluntarily organized: at first the Bike Maffia collects donations and as soon as the volunteers organized themselves, they are get started together - thoroughly supported by their lead activists.

But which “specialities” has the BM in Debrecen? First and foremost Richard is hinting on locally specific obstacles like the Debrecen Cívis, a unique feature of the city’s citizens’ mentality: Following a very stubborn attitude, they are hard to convince of any change - even if it improved their own life. Debrecenians are inclined to stick onto the old customs rather than energetically moving towards something new. Even if they may be critical as well, their general spirit has been for too long: We want a better life – but without putting energy into it.

This civis mentality has led to a huge gap between Debrecen’s different social levels and groups, which rarely cooperate on anything in order to overcome social fragmentations. While the privileged often don’t see their responsibility to support for example the homeless, these often are too proud to ask for help. Szabolcs Rácz, one of the chefs and activist of DBM emphasised that „to build a community is quite important, as it teaches people, even adults, how to turn to each other, how to ask for help and as they see that it’s not a picture of weakness”.

To forward this new mentality of compassion and solidarity in Debrecen was actual heart of the Bike Maffia’s work, Szabbi explained. To raise awareness of social problems by involving people into taking shared action – this is DBM’s contribution to a silent revolution in Hungary. Their revolt is a fight without weapons. As simple as effective: by radical acts of kindness.