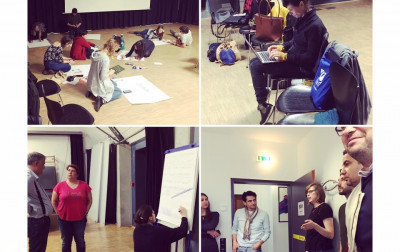 Youth workers and youth leaders from 11 countries gathered between 03-07th May 2017 in Münster, Germany, in order to share their best practices and develop common project ideas for future cooperation.

The project "Xperience Xchange" was initiated by the Arbeitskreis Ostviertel e.V. (AKO) to share the already existing know-how of 11 organisations from the European Union and its neighbouring regions as well: Germany, Tunesia, Macedonia, Hungary, Armenia, Poland, Georgia, Ukraine, Spain, Belgium and Cyprus.

The participating organisations are active in the field of youth and work especially with the tools of classic and digital media. Many partner organisations involved in the project are focusing on young people with fewer opportunities and acting in underpriviled areas as well. In order to reach out for youngsters and engage them, youth workers need to develop their own skills and competences by learning from their peers, sharing good practices and exchange tools and methods.

Besides sharing good examples, the seminar provided time and space for international networking as well. Thanks to proactive participants - such interesting topics were also discussed as gender and the role of women in global mass media or working with disadvantaged youngsters in Roma communities. The representatives of the organisations were asked to create informative posters about their organisations which were presented on the walls of the seminar room, in order to have a better overview of each others’ daily activities. During the funding workshop, participants were informed about bigger-scale project possibilities within the Erasmus+ Programme. After mentioning many interesting project examples, the participants were inspired enough to come up with their own common project ideas in the frame of the Strategic European Voluntary Service (EVS), Capacity Building and Strategic Partnerships. After the hard work, participants had the chance to join the Award Ceremony of the International Citizens Media Award in the Citizens Centre Bennohaus in Münster.

Although the length of the seminar was relatively short, the participants touched many exciting topics and discussed about lots of good practices, which gave them a positive push for future project ideas and further cooperation with each other.