Digital Journalists of the Future 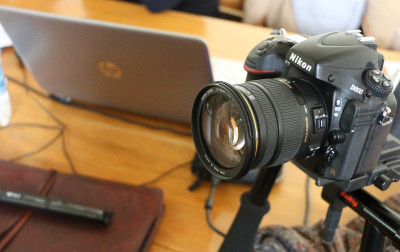 In the frame of the Erasmus+ project “Citizen Journalism and the Digital Media Dialogue for Social Participation”, the Arbeitskreis Ostviertel successfully implemented a week-long training course, fostering digital and communication skills of 28 participants, the digital journalists, multipliers and educators of the future.

The participants from Ukraine, Poland, Belarus and Germany took part in various training sessions, discussions and intense group work, in order to tackle different aspects of online journalism. After theoretical introduction to the world of digital media, the participants got hands-on training and were focusing on written content-making, reporting about the event and its main topics. They were covering the recent political happenings starting on Square Maidan in Kiev, while reporting about Ukrainians moving from the conflict zone to the capital city, and about the difficult financial situation of average Ukrainian citizens.

While tackling the previously mentioned topics, non-Ukrainian participants learnt a lot of new information about the hosting country, its citizens and their everyday challenges. The participants discussed the current political situation with Russia and the different point of views on inner-country migration flows. With the tools of new media, very important civil engagement issues were raised during the training course. The setting of the activity was also very inspirational for the participants, as the training took place in the Taras Shevchenko National University of Kyiv.

Besides improving their digital skills, the representatives of the four partner organisations got to know not only local young people, youth workers and educators, but the Ukrainian culture as well. They took part in a multicultural international night and discovered Kiev together with their peers.

The Arbeitskreis Ostviertel is cooperating with the Forum of the Ukrainian Journalists for years. It was a pleasure to collaborate with Mr Volodymyr Danyluk and his organisation again, who provided logistical support during the training course. AKO is eager to continue the common work not only with the previously mentioned institution, but also with the Belarusian Association of Journalists and Managerial Initiatives Foundation from Poland, the other partner organisations of the media dialogue project.

Videos created during the project in Kiev:

After the revolution Ukrainian society is changing. Fedir Musurahin is a student of journalism at Taras Shevchenko National University of Kyiv and he has a very specific plan concerning his future. He presents his vision of Ukraine:

28 young people from Ukraine, Germany and Belarus met in Kyiv, Ukraine to share their points of view concerning journalism, ways of deal with different topics and difficulties in their countries. "Meeting participants from different countries as Belarus, Ukraine and Germany helped me realize that all of us have almost the same problems in our countries and we are fighting for the same reasons" admits one of the participants. A participant from Germany added "Working and living with people from East Europe helped me breaking many prejudice I had".

If Ukraine wants to join the EU, its government should take into consideration that living there and in other countries is different. Two women from Kyiv shared their everyday struggle of how to survive monthly from not more than 50€...

Audio created during the Erasmus+ training course in Kiev:

Three years of Euromaidan, three years of Ukrainian Revolution and extensive nationwide upheaval. Evidently. Three years of crisis and war. Maybe. But three years of progress? Trying to get hold on the Revolution's current state and outcome, we have produced a ten-minute radio report about Ukraine's difficult strive for the EU.