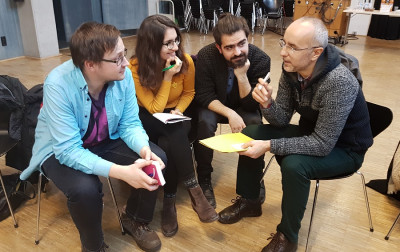 What do schools in small villages with only some pens and desks, and conflict journalism have in common? Last week, Youth4Media got the answer: “Digital Inclusion”, the title of a one week international project among Turkey, Greece and Germany. “I learnt many things about media: how to use different tools -as Facebook or Twitter- and how to use them for other projects like this one. So for me it was really spiritual”, Rania Armagos, a Greek participant affirms.

The project in Münster is already the third part of “Lifelong Learning for Digital Inclusion through Media Literacy” (Learning Media) project which is a long-term project funded by the Republic of Turkey and the European Union within the Civil Society Dialogue Programme Education Grant, in partnership with YOUTHART Youth Art Research and Training Association from Istanbul – Turkey, European Youth4Media Network e.V. from Münster – Germany, and Media Terra Nea N.P.O. from Thessaloniki – Greece.

With ice-breaking games, one episode of TV series called Black Mirror and 4 seminars; 15 participants learnt how important Internet is nowadays, even more if we are talking about communication or journalism. The four seminars touched the following topics: digital inclusion in school, Schönlinge.DasProjekt, minorities and using media during a war. The participants had also the possibility to get to know the city of Münster better thanks to the sightseeing day, having meals in local restaurants and enjoy the evenings in the Old Town's pubs.

The third project meeting finished with finished with already a conference organised. During the morning session of the conference we had the possibility to know more about the aims of the project from short presentations of coordinators from Greece, Turkey. In the afternoon part, the conference participants listened to Jonas Kühn Mediending talking about media education for children with special needs, Arndt Selders from Arbeitskreis Ostviertel and digital inclusion projects with seniors ran in Bürgerhaus Bennohaus. The conference finished with an online game prepared by one of the Turkish participant. The qiuz consisted of 10 questions concerning digital technology. The participants had to use their mobile phones in order to take part in the game. Undeniably, it was the most exciting part of the conference.

Barış Can Sever from Turkey: It was a great experience for me. It was the first time that I was involved in an international project as a project coordinator. So, I gained a lot of new skills, experiences and knowledge thanks to other participants and coordinators. The whole week was amazing with a variety of activities, city tour in Münster and organic people around me. Right in the middle of Mü-mü-mü-Münster, I had an important chance to meet with other amazing people in the project. When I was dealing with the project documents and meetings, participants were having fun with the activities in the project and they were learning new things about the digital tools and social media. Thanks to our good communication, I also learned what they experienced during the sessions from the participants. Shortly, with each moment, it was such a good international project for me. I always believe in the importance of universalism. The international feature of the coordinators and participants were crucial for me. I enjoyed the time with them and I learned many things from them. It is also important for me because I see many different arguments and point of views on how to conduct project programmes and how to communicate with others. I am glad that there is not only a way and we are always trying to understand each other. That’s so lovely.

Bedri Keshin from Turkey: “I think the project was really good, mostly because presentations were really effective. The team group was perfect, free time too, everything. I learnt the usability of media during this project. The issues covered were up-to-date and it was really nice.”

Rania Armagos from Greece: “I learnt how to use media and digital tools during a conflict or a war, cause we always thing it is something far away from us, but nowadays it is not” “It was really good the mixture between theory and practise, with games and videos, cause all this material helped us to understand better every topic.”

Filippos Polyzoidis from Greece: "I wanted more digital practice: camera use, editing. In general we learnt a lot about how to combine several tools to share a message, of any kind, and to creat new networks."

Rosa von Scheidt from Germany: "I took part in this kind of project for the first time so I was excited and to be honest a little afraid. What would happen? Will I fit in? But after meeting the other participants, those fears vanished really fast. So it was exciting and really funny.  It was also very interesting because I've never been to the countries from which the participants come from (Greece and Turkey) so I just knew about them from the Internet and the TV. Now I could ask them about their opinion and impressions about the situation in their countries in person. Also it was just fun to learn about different languages and cultures."

Grzegorz Konopski from Germany: "There are weeks and there are WEEKS. This one falls into the latter. Getting to know media, debates about political and social state of Asian and European countries, travelling, amazing food and integration with an unforgettable group: all rolled into one. What is it? It's an experience to be had. I highly recommend it!"

Efective, beneficial and friendly, interesting and inspirational are just some of the key words used to describe this long term project (to know more about the project click here). There had already been 3 project meetings. meetings: Istanbul, Turkey (May 2016), Thessaloniki, Greece (September 2016) and Münster, Germany (January 2017). Learning Media project will finish with the last meeting in April in Istanbul. If you are interested in taking part in the last part of the project, join us and apply here: