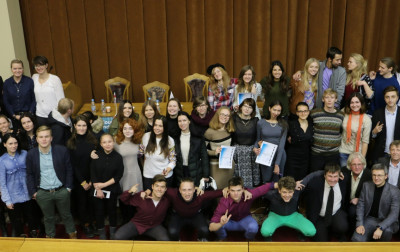 Project of the “Arbeitskreitskreis Ostviertel” finishes with conference in Kiev.

Münster/Kiev. Media function as an adjustor between current occasions, events and citizens. One of the main tasks is the production of a public, at its best a public which deals with civil society discourses. But such a public cannot guarantee that citizen campaigns themselves act civil socially. Citizen media offer the possibility of an active engagement. Citizen media take civil society subjects and questions on and work them out. A successful example of engagement politics through citizen media is the project “Citizen Media and Media Dialogue for Civil Participation" which ended in Kiev within the last project week from the 18th November to the 25th November 2016. This project is supported by the Department for Foreign Affairs of the Federal Republic of Germany and is conducted by the Arbeitskreis Ostviertel e.V. from Münster. The project promotes civil society structures and the collaboration between the partner countries Ukraine, Belarus and Germany.

The following aims were aspired:

- Collaboration of the civil society in the sections of media, sciences and NCO’

- Qualification of journalists and students in the media section

- Promotion of the pluralism and federal structures through compostion and development of the information-, opinion- and media-diversity

- Mediation of values of the democratic basic order

Besides the AKO e.V. the Open Channel Ludwigshafen, the Forum of Ukrainian Journalists (Lutsk), the Institute of Journalism, National Taras Shevchenko University of Kiev, the Belarussian Association of Journalists (Minsk), the Federal Association of Citizen Media and Training Media – Bundesverband Bürger- und Ausbildungsmedien (bvbam) and the European Youth4Media Network e.V. (Münster) were partners of the project.

For the editing process of the subjects and contents stakeholders from the civil society, media facilities, politicians, administration- and government participants, pubic institutions were interviewed, included and involved.

40 qualified citizen journalists and NGO-staff were educated in Ukraine and Belarus.

Within the training courses of the project media contributions, films, articles and blogs concerning the topic citizen engagement and participation, federalism and division of powers, economic and education were developed. These products are spread on a common developed multimedia internet platform and in the media of the involved countries.

The results of the project were presented at the final conference on the 24th November 2016 in Kiev to a wide audience and the press.

At the conference new concepts, models and projects concerning the following collaboration in Ukraine and Belarus were planed and designed.

Structures and networks were created which work together and fertilize each other.

By the inclusion of different stakeholders and players as well as the great media coverage the project experienced an excellent public distribution in the involved countries.