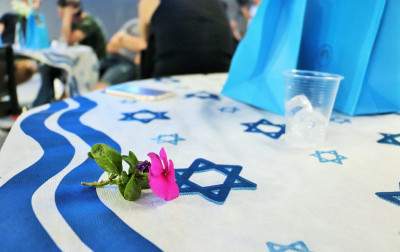 It has been a week full of media, music, art, amazing weather and meeting friendly people. Almost 30 young people from Germany and Israel met in Rishon LeZion to participate in Media Bridges for diversity and peace project organized by Bürgerhaus Bennohaus from Münster (Germany), Youth Department Rishon from LeZion (Israel) and Revivim High School from Rishon LeZion (Israel) and supported by LWL and Stadt Münster.

From 13th to 20th October 2016, 13 German participants visited Youth Centre in Rishon LeZion to take part in the exchange Media Bridges for diversity and peace. All of the youngsters have been working in five groups:

Meyrav Kopito, the organizer from Israel speaks about the objectives of the project "The program aims to create opportunities for new meetings and contracts along the youth, on the basis of human civilization and social-media, all with a special understanding of the historical context. The younger generation must know about the disastrous events of the past that have happened during the Nazi dictatorship and on the other hand to hold meetings to strenghten and deepen mutual ties of friendship, respect and join action."

"This week was full of joy and real emotions, I felt very home and welcomed by everyone, the people of the exchange group, my host family and especialy Saphir have been the best thing in this trip!" said Emily Salzig, a participant from Germany. David Smolovich, a participant from Israel also expressed his positive feelings concerning the exchange "It was very fun to meet new people my age and befriend them, I really enjoyed hosting a German person and showing him our Israeli culture."

Media Bridges for Diversity and Peace is a join project of two groups (Israeli & German) during which a documentary film, a musical piece and a theatre play that connects the story of their shared past of the teams from the two nations will be produced. Our project really reflects our group, which consists of participants with different backgrounds, from different countries: Poland, Greece, Spain, Iran, Israel and Germany. The ability of the participants to create products together and working together reflect the social-human experience which makes it so profoundand meaningful.

During the following week the participants also got to know better Rishon LeZion, enjoyed an afternoon on its beach, went to Tel Aviv and had the possibility to watch a Bollywood performance in the theatre, danced together in Jaffa, had a trip to the The Dead Sea, celebrate shabbat and sukkot with their host families. The final event was a great opportunity to present the final products of each of the groups. We could listen to two songs, watch a theatre performance, see the 'making of' of the project and listen to an interview with Mrs Yehudit Yerushaimi-Terris - the survivor of the Hoocaust. All the participants received certificates and small gifts.

The organizer and the trainer from Germany, Daria Jaranowska adds "I am doing this project for the 3rd time and I am again amazed how creative and full of ideas young people can be. It is fantastic to hear the music, see the people paying, acting, filming, writing. I could be doing it again and again and again."

Media bridges for diversity and peace was organized by the AKO Bürgerhaus Bennohaus from Germany with a support of Youth Department and Revivim High School from Rishon LeZion from Israel. The project is supported by the LWL  (Landschaftsverband Westfalen-Lippe) and Stadt Münster.

Information about the first part of the project you can find here: http://youth4med.com/?p=576