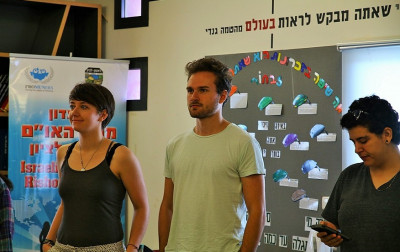 "The first day I was walking in the street in the middle of the city centre and I just realized I was in Israel. A day before I was in Germany, which is really amazing, and now I am in Israel." admits one of the participants of Media Bridges for Diversity and Peace project which is taking place in Rishon LeZion in Israel.

On 13th October 2016 a group of 13 youngsters from Münster, Germany had packed their suitcases and started over 10 hours travel to get to Rishon LeZion, Israel. Those advernturous and open-minded people are taking part in one week project together with thier Israeli friends who had visited Münster in August 2016 for the first part of this exchange. After the warm welcome at Tel Aviv airport the German participants were taken by their host families to have a rest and to enjoy the sunny and hot weather of Rishon.

"The best thing about travelling is breaking your prejudices. I was expecting religion everywhere with tall men with black clothes and beards and even my host family is not that much religious. What I really realized is that you should not deny any place just because of a political situation or a political conflict. Even if there is one, you will find warm people and places that will make you feel like home." admits Sabela González García, a participant from Germany.

"I'm so happy to join the project. Johanna is a good person and she comes from a good family. She's the first German person with whom my grandfather, the survivor of the Holocaust, has spoken since a long long time. It was an important moment for me but also form him because it shows that our current life has changed from the one in the past" admits Maayan Mula, a participant from Israel.

During the first day in Youth Department, the Israeli organizer Mrs Meyrav Kopito did the introducion to the project and all the participants played some games and energizers. They already had the possibily to know each other better and laugh together. Afterwards the group work has started. In this part of the project there are two video groups, a theatre group, a music group and a PR group.

"The theatre group is great. They got into the idea of the project immediatey as I tried to get the topic closer to them. They have the time to be together and to work together. My participants have been working in small groups of two and each group has come up with one scene already. Even though the participants are just teenagers they really understand what is happening in the society and they discuss the topic of the project in a very mature way. " says Adi Budin - a participant from Israel and the leader of the theatre group.

Both Israeli and Germans are full of energy and ideas which undeniably will result in gaining satisfactory products.