A symbol of partnership 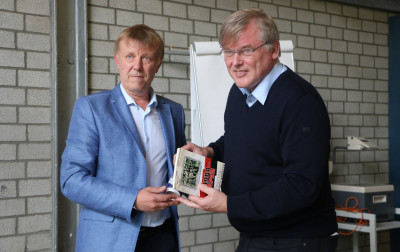 Journalists from Ukraine and Belarus visited Germany to learn about the structure of German community media, education system and agriculture. Between 16-23.09.2016 young explorers stayed in Münster and Ludwigshafen under the project ‘Citizen Journalism and Digital Media Dialogue for Social Participation’.

Young journalists from Kiev, Luzk, Berdjansk, Minsk and Brest spend a week in Germany to get an impression about different systems of Western Europe. For this reason the group split into two – one went to Münster another one to Ludwigshafen. Both of them, after the theoretical training about the technical side of media (cameras, sound, light, etc.) recorded their videos.

The guests of Ludwigshafen had a chance to have a look how the community media in O.K. Ludwigshafen works. The group in Münster learnt about education system and agriculture in Germany. Their focus points were: ausbildung (apprenticeship) and milk farms. They interviewed two girls who are doing their apprenticeship (one of them in media centre and another on a farm). Next step was to observe the situation on German farms (how they are structured, how they are different from Ukrainian and Belarusian ones). Three different farmers were interviewed. All the participants could have noticed that it is not that easy to be involved in agriculture in Germany and that it depends a lot on the consumer habits (which mostly the prices and not the quality rules).

As young media workers from Ukraine and Belarus, participants were also interested what is the situation of journalists in Germany. Thanks to the special invitation from Bürgerhaus Bennohaus, Günter Benning from Westfälische Nachrichten (local newspaper) visited the delegation to talk about the work of his newspaper and the condition of printed media in Germany.

In the end of the project participants visited the mayor of Südlohn (a place where all 3 farms are located in). He explained them the federal system of Germany. As a symbol of partnership between Western and Eastern Europe the group planted a tree in Südlohn. Volodymyr Danyliuk, the leader of the delegation, also received small plants of spruce, which he took to Ukraine and will plant them there. This exchange let to realise how important connections between those countries are and that this project is something more than just showing the Eastern European a good examples of Germany. It might be a small change in the minds of the participants  but also maybe it will cause a big change in Ukraine and Belarus.

Meeting in Germany was the second part of ‘Citizen Journalism and Digital Media Dialogue for Social Participation’ project. The first one took place in Kiev, Ukraine. More information about that seminar you can find here: http://youth4med.com/?p=544.

The last meeting of the project will take place in November 2016 in Kiev, Ukraine. The topics of migration, Ukraine in EU and current financial and political situation of Ukraine are planned to be discussed during the seminar and the final conference.

The project is supported by the Ministry of Foreign Affairs of Germany. Citizen Journalism and Digital Media Dialogue for Social Participation is organised by the AKO Bürgerhaus Bennohaus (DE) with the support of Forum of Ukrainian Journalists (UA). The project partners are: Journalists association (BL), OK Ludvigshafen (DE), European Youth4Media Network e.V. (DE) and Taras Shevchenko National University of Kyiv.