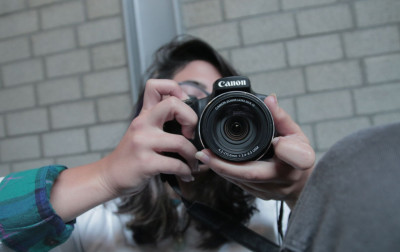 Project ‚Media bridges for diversity and peace’ brought together almost 30 Israeli and German youth to overwork the topic ‚Discrimination in the past and today‘. The first meeting took place in Münster, Germany at the beginning of August (01-08.08.2016).

Summer 2016 was the time when young people from Germany and Israel met together to experience different cultures and talk about art. In both countries there are people with different social, cultural and religious backgrounds. The main task of the participants of ‘Media bridges’ was to find out  stories of the local families, which because of their origins might have problems in life. The most important question was, if the stories of different generations would be various. Do parents with migration background feel the same as their children? Youth decided to answer those questions through different forms of art.

Two music groups created two songs: ‘Speechless’ and ‘Other side’ in which they explained that ‘It depends on you, if it is heaven or hell’. One of the songs was played live during the final event on the 7th of August, the second is available here: https://soundcloud.com/user-237847016/otherside

Another group decided to prepare a theatre play. Youngsters, mentored by the German trainer Timo Matzolleck, presented two impressive scenes dealing with iconic as well as intense situations of everyday discrimination – both in Germany and Israel, nowadays and in the past. The scenes intensity strongly reflected work of the group during that week: Within the shortest time there was relaxed companionship, deep and honest improvised scenes and lots of laughter. ‘They jointly experienced their bodies, their voices, their intuition and unfiltered creativity in unusual ways, in order to consequently develop their improvisational and theatrical skills: Stop thinking, start playing!’ mentions Timo Matzolleck.

Two other groups were dealing with videos. One of them created a documentary about the project itself: https://www.youtube.com/watch?v=ZXdI9HU0zSc&feature=youtu.be. The second one made a video portrait about Efraim Yehoud Desel – an Israeli man who left his country to spend his life in Germany with his family comparing if his children (who were already born in Germany) feel the same. The video team interviewed also the daughter of Efraim – Elinoah. And even, if she feels more Israeli, she prefers Germany as a country to live in.

Both groups – German and Israeli, except of working together, had also a change to get to know their cultures during intercultural evening and to get to know the city of Münster during long sightseeing day. Those, who really liked the other culture and the other participants will have a chance to join the second part of the project which will this time take place in Risho LeZion in Israel.

The project let the young people to develop their cultural and political knowledge. The discussions about equality, freedom, respect let them to understand better how those issues are interpreted in different parts of the world. Comparing past with today, answered many questions about hopes and power, which people had or have to fight against discrimination.

As Adir Ben Avi from Israel sums up: ‘If you have a chance to join this project, you just do this!’.

Media bridges for diversity and peace was organized by the AKO Bürgerhaus Bennohaus from Germany with a support of Youth Department and Revivim High School from Rishon LeZion from Israel. The project is supported by the LWL Münster and Stadt Münster.