Face Up returns to Thessaloniki 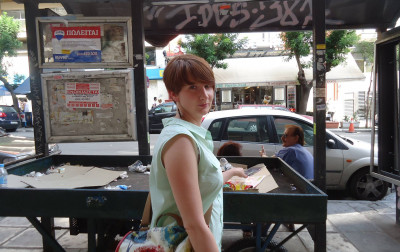 The long-term cooperation between the organisations YouthART (Istanbul, Turkey), MediaTerraNea (Thessaloniki, Greece), FRG (Timisoara, Romania) and Youth4Media (Münster, Germany) is about to end in August 2016. The ultimate international training course of the project “Face Up” was implemented on 27th June – 04th July in Thessaloniki, Greece.

"Face Up" involved local youth initiatives in the previously mentioned countries and 6 international training courses which were focusing on such topics as e.g. civil society engagement. During the last training course the participants created short videos about climate change issues. One of the German participants, Katie Krukar listed some reasons why you should be happy not to join the activity:

“As the summary of the last Face Up training course, I would like to share 5 subjective reasons why you shouldn’t have joined us in Thessaloniki:

Firstly, because it is over and was such an incredible opportunity to meet people from Turkey, Germany, Greece which would never appear again. Especially as some of the participants even have roots from Poland, Hungary, France or the Czech Republic. This perfect mix of different nationalities gave me a unique chance to discover other cultures very closely.

The Thessaloniki harbour was the ideal place for sharing points of views, having serious discussions about culture and religious similarities or just a simple laughter together. I feel that these were the main aims and values of the entire project.

Secondly, you shouldn’t join this project if you just want to lay on the beach instead of walking around the city in 38 Celsius Degrees to get a good material for the videos. It is something interesting in being a member of a filming crew which gives you extra confidence and lets you become shameless of asking random people on the streets for the interview, or being an actor in front of the camera.

Thirdly, no way you should take part in this project if you want to be slim and stay on your strict diet. The food was so amazing, tasty and local, that we couldn’t resist of finishing the last bite and every night we felt like stuffed turkeys. The organisers paid extra attention to choosing a very good restaurant and gave us a chance to try the delicious Greek cuisine.

Fourth, don’t join if you don’t want to change your feelings about climate change issues. After many discussions with the participants, doing research about climate change and finally experiencing extreme temperatures and thunderstorms in Thessaloniki at the first hand, you will always think twice before taking a plastic bag or buying one more plastic bottle.

And finally, you shouldn’t have joined this project because you would be surprised how quickly your horizons can broaden within a week, how differently you start to look at other nations and how often you remember to apply a rule of thirds in your holiday selfie.

Well planned and organised projects are combined of both: intensive work and great fun. This training course in Thessaloniki was definitely one of them. Thank you all!”