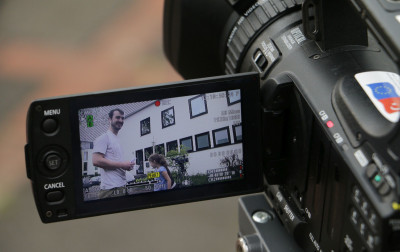 In the week 20.7.16 – 26.7.16 the second training course of the Team Up Youth project took place in Münster, Germany, following the first course which took place in September 2015 in Struga, Macedonia. A mix of media trainers and students from UK, Macedonia, Denmark and Germany met at the start of the week and did some energisers and decided on the groups, splitting into 3 groups, a video group, an audio group and the blog group with each group consisting of participants from each country.

The video group spent the week working on an interview with Jacco from the Medien Ding department of Bennohaus. Their aim was to create a profile of Jacco and the work that he does within his team in Bennohaus and to learn how to create a professional interview. They captured some footage of him doing his work at Bennohaus and at home before following him on a project at a local school in Münster. The participants first practised how to use the camera, both handheld and on a tripod, before going out into the field to capture their documentary footage. They used Adobe Premiere Pro to edit their footage. Jonas from Denmark, one of the participants of the video group had this to say. “I think it was exciting and we got a lot of new experiences with camera, and the programme we’re using is similar to the
programmes I am used to using at home. I also learnt about picture composition, especially the rule of thirds.”

The audio group also created a radio report related to the Medien Ding department. Their project was broken down into 3 different sections, interviews with students at a Comprehensive school in central Münster, an interview with a media trainer and two different radio plays focused on a kindergarten theme and a pirate theme. The project leader, Jonas from Germany, described the purpose of the project to allow the participants to get to know the Medien Ding department better, learn how to effectively capture and record sound for audio projects and learn how to use the editing software. The software they used was ‘Audacity’, which was a new piece of software for some of the participants, but they all worked really well and found the software easy to use. One of the participants said: “I found it was a lot like doing a video projects in terms of how the software works which made it easier for me to use.”

The blog group decided to create a blog all about media in relation to education, practise and discussion. They looked at what made a blog interesting for the reader and then discussed which elements we would like to incorporate into our own blog. The group developed their journalistic skills whilst writing articles, taking photographs and joining the other groups on their projects to get the ‘inside scoop’. The group worked together to create a blog that would represent the projects conducted over the week as well as the organisations and participants taking part in the over arching project. “What didn’t I like about working on the blog?” said Grzegorz, “I will definitely look at creating my own webpage using WordPress because it is so easy to use. Creating my own blog has been on my mind for so long and now I have the tools and knowledge to do it! It will be a creative outlet for my ideas and thoughts.”

On 23.6.16, in the middle of the training week, the final conference for the Team Up Youth project was held at Bennohaus. This consisted of some discussions about media education from different countries, outlining the use of media in their education systems. From Germany, there were speakers from the Martin Luther King school, which specialises in teaching children with verbal learning disabilities, and how their collaborations with Bennohaus have helped the children they teach. After this we heard from each of the partner countries as they discussed how their organisations work within their countries. After a short break we then heard about the main output from the Team Up Youth project which is the guide which gives advice and guidance on how to promote media competence in schools. Following this there was a panel with representatives from each of the partner countries, which discussed whether media was the right tool to help to develop competences in children and young people, especially when related to employability. The representatives from each country spoke passionately about the topic and were able to discuss the impact of media in education in each of their countries and how they could learn from each other.

Towards the end of the week all of the participants got to spend a bit of time exploring Münster, visiting some of the local areas of interest (such as the Cathedral) and learning a bit more about the city and about each other.

The project is supported by the the European Union's Erasmus+ Programme