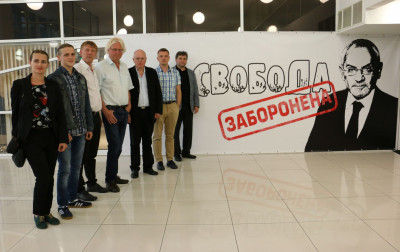 Young journalists from Ukraine and Belarus met together in Kyiv, Ukraine to talk about digital media and social participation. Supported by trainers from Germany they learnt how to use video/photo cameras and how to create their own reports.

Citizen Journalism and Digital Media Dialogue for Social Participation training course took place between 6th and 13th of June 2016 at the Taras Shevchenko National University of Kyiv. Twenty journalists and students from different regions of Ukraine and six from Belarus met together and discussed variety of topics connected to digital media and social participation. Both countries are dealing with the issues of freedom of speech and are trying to find the way to make community media popular in their countries. International media trainers from Germany shared with them their experiences and examples of free media created by citizens in Europe. They also taught them how to use professional equipment, so that they could start to make their own video and photo reports.

The group was divided into 4 groups: 3 video report groups and one blog group. The aim of all of the products was to inform about the nongovernmental institutions and civil society. First video group created a document about local NGO, second about community media and the third about the Chernobyl issue, which influenced mostly the society of Ukraine and Belarus but also another European countries. The blog group was writing a blog about media dialogue and about the project itself. As Kataryna Sokolova, one of the participants of the third video group, says: ‘I’ve been studying in the Institute of Journalism for 7 years. My specialty was ‘Printed Press’. I have not really worked with the cameras, microphones, light, composition, etc. Our only composition had to be in the text. That’s why I was excited to try myself in other area and to make something useful. It’s good that we had a trainer who showed us that you need to feel the camera, the moment, the power of our work. I believe that we collaborated stunningly as a team where every member could express themselves. We helped each other in realizing what we hadn’t noticed on our own. Our topic was extremely serious, it’s not a few days job that had to be done. But we tried to do our best. I think that everything we do for the first time is a masterpiece at that exact moment because we open people’s eyes on the things
they didn’t know’.

The highlights of the meeting were not only the workshops but also some visits. Chernobyl left a big impact on the souls of some participants. A  big experience was also to get to know Savik Shuster – one of the biggest TV hosts in Ukraine. As Olga Popova mentions: “It was great experience for me. I’ve never been on such huge show, so it was very interesting, because I had  a chance to see how it works inside. Each Friday evening people sitting in front of the TV to watch the Shuster-live, because the topics which discussed there are very important for everybody”.

In the middle of the meeting in Ukraine – a conference took place, during which a new attempt to investigate the problems of free press in Belarus and Ukraine was undertaken. On 8th June a panel of media experts presented their reports. Topics of community media, freedom of speech and civil engagement were mostly discussed.

Meeting in Kiev was the first step of the project Citizen Journalism and Digital Media Dialogue for Social Participation. Next trainings will take place in Germany in September 2016 and in Ukraine in November 2016. The aim of all of the meetings is to show young multipliers from Ukraine and Belarus how the media system and nongovernmental organisations are working in Germany. The project is supported by the Ministry of Foreign Affairs of Germany.

More information about the conference you can find here: http://youth4med.com/?p=542

And about the visit in Shuster TV here: http://youth4med.com/?p=541