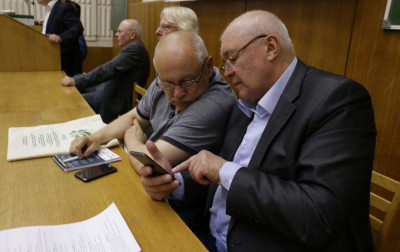 A panel of media experts from Ukraine, Belarus and Germany discussed the questions of free press, media pluralism and civil journalism on a conference within the project. The participants and other interested visitors had the possibility to express their opinion and to contribute to solving current problems.

A new attempt to investigate the problems of free press in Belarus and Ukraine was undertaken during the conference “Citizen Journalism and Digital Media Dialogue for Social Participation”. On 8th of June a panel of media experts presented their reports: the Head of the Bennohaus Munster in Germany, Dr. Joachim Musholt, the Director of The Institute of Journalism Volodymyr Rizun, The President of Bundesverband Bürger- und Ausbildungs-medien Dr. Wolfgang Ressmann and others.

Volodymyr Rizun pointed out that modern digital media give laymen the opportunity to express their opinion. Professionals should help citizens and citizens should strive to work professionally. It would be reasonable to organize educational programs, workshops and trainings to reach this aim.

Dr. Joachim Musholt emphasized on necessity of practical measures to strengthen civil society. He focused the steps that had been done in this direction. Nevertheless there is still “food for thought”. Dr. Musholt is intending to establish a network of NGOs, new platforms in Ukraine and Belarus in order to develop pluralism in both countries.

Representative of Ukrainian National Journalists Association, Sergey Krashchin, said that technologies are constantly evolving and provide more and more fantastic possibilities while the media’s subjects and objects remain the same – journalists and protagonists. The aim of journalistic progress in Ukraine must be 800 local media centers in all the regions of the country, Mr. Krashchin emphasized. He considered that it can help journalist to work without oligarchs’ necessary sponsorship – thus impartially and independently.

Dr. Wolfgang Ressmann summarized that this year as very successful for societies and democracy all over the world because of the big progress made in questions of freedom. Freedom of speech and freedom of press are the most important things for a healthy democracy, Dr. Ressmann said, as modern-day technologies allowed citizens to control the government more effectively. “We have to use this experience to promote the democracy in Europe”, Dr. Ressmann said.

The Head of Belarusian Journalists Association, Andrey Bastunets, explained that there are two journalistic unions in Belarus that exist since the Soviet period – a pro-governmental and an independent one. “This divide reflects on the whole society that also consists of two parts”, - Bastunets outlined. He indicated that all three countries - Belarus, Ukraine and Germany – show a high variety of different media. However, he prognosticated the print press’ death in these countries within 7-10 years.

Representative of “Spilniy Prostir”, an NGO fighting for free and independent journalism in Ukraine, highlighted that lots of media content doesn’t match the audience’s interest. Instead media owners determine most contents.

To bring the conference to an end, the Head of the Forum of Ukrainian Journalists in Volyn region, Volodymyr Danyliuk, stressed the significance of educational programs for laymen provided by media experts. It is good when the local society is engaged in the public life and just as importantly is provided with new perspectives, Mr. Danyliuk said.