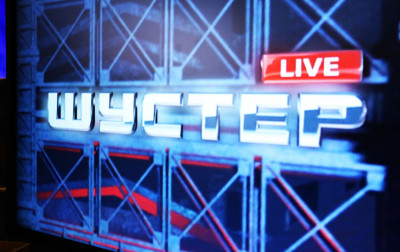 TV show “Shuster-live” is one of the most notorious and popular political programme in Ukraine, the guests of which are well-known politicians, public figures and other socially-active persons. The guests of the programme discuss the most important issues in Ukraine and in the world. An interesting fact is that ordinary people not only hear the views of well-known politicians and invited experts, but also have the possibility to ask questions and participate in discussions. This interaction is very often conducted in hot atmosphere. It happened many times that the audience had a  totally different opinion than the main guests, especially that the topics of the show are controversial.

During “Citizen Journalism and the Role of a Digital Media-Dialogue in the life of a Society” project the organizers and participants visited the studio of channel 3STV. Visitors had the opportunity to familiarize themselves with the work of the channel, which host the most resonant talk show in Ukraine.

Participants of the project had the chance to join the tour through the studio organized by  The Head of the Social Communication Department Alona Tofanchuk. She explained the principles of work of the 3STV station and selection of the viewers for each programme. There are many criteria of choosing the audience: 100 people from all regions of Ukraine, of different age, gender, and social status.

Project participants also got acquainted with the owner of the studio who at the same time is the host of “Schuster-live” - Savik Shuster. Savik explained the principles of the operation and finances of the channel, the difficulties associated with the work in Ukraine, as well as the development of media in Ukraine in general.

Two participants of the project Alaksiej Minchonak from Belarus and Olga Popova from Ukraine had the opportunity to participate in one of the programmes as experts.

As Olga Popova says: “It was great experience for me. I’ve never been on such huge show, so it was very interesting, because I had  a chance to see how it works inside. Each Friday evening people sitting in front of the TV to watch the Shuster-live, because the topics which discussed there are very important for everybody”.

What is interesting, Alaksiej Minchonak was asked by Shuster to comment the situation of Belarusian war voluntaries in Donbas and Maydan: “It was very important to say it on air about situation with Belarusian which take part in antiterrorist operation on the east of Ukraine, because they can be issued to the Belarusian KGB for they fighting for foreign country, it’s a legal by Belarusian law.” Here you can have a look at his statement: https://www.youtube.com/watch?v=CL2IdHQtJYo&app=desktop

This show is really important for Ukrainian society and for the development of free media in Ukraine because it’s an example of private media which tries to be independent from the government.