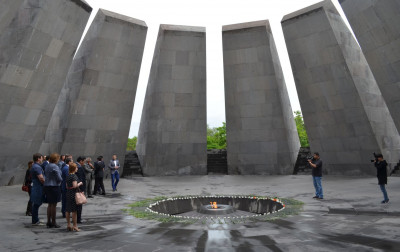 Serbia, Macedonia, Armenia, Germany, Poland and Georgia – participants from those countries met together to deal with topic of genocide. The project called Get Insight & Get Inside took place in Yerevan, Armenia between 14th and 20th May 2016.

The project idea was initiated by the Centre for Strategic Research, Armenian organiser, as they realized the urgent need to act against anti-democratic tendencies and discrimination among young people. Nowadays, discussing those topics is crucial especially in times when the right-wing parties are getting stronger and the issue of refugees is dividing Europe.

For a week 28 youth workers were dealing with the history of the 20th century in Europe/Caucasus and its impact on the current situation. What is important, they had the possibility to analyse the past and its consequences with their neighbours. Participants from: Poland/Germany were talking about the II World War, Serbia/Macedonia – Federation of Yugoslavia, Armenia/Georgia – Soviet Union.

After creating the common posters about history, participants gave the others an input about the current situation in their countries. They were talking about the general political situation, human rights, freedom of speech and democracy. All of them quickly noticed that there are many issues, which are the result of the past. As Filip Trajkovski from Serbia says: ‘This was a great opportunity for young people from different countries to come together and learn from each other. Topic of this project is always an up-to-date theme, and it is always welcome to exchange experiences, encourage the dialogue and discussions in order not to come into a situation and allow us history to repeat’.

An important part of the project was to talk about the Armenian Genocide and the situation in this country. For that reason, youth visited the Museum of the History of Armenia, Genocide Museum, National Press Agency and a local radio station. The stay of participants was a bit overshadowed by the recent conflict in the Nagorno-Karabakh region. Two special guests of the project (genocide experts) were trying to explain the background of that complicated issue and show the connections between the genocide and the current conflict with Azerbaijan and the antipathy towards Turkey.

Next to the participants who took part in the seminar, there was also youth involved in the video group. Those had the chance to deepen their knowledge about cameras, taking photos and filming. Video group created the making of report, which documented the whole meeting. Participants of this group were also filming the final debates, which took place at the end of the seminar. This is how one of the Macedonian participants, Vlado Cekic, sums up the project: ‘Friendship, respect and faith in one peaceful world strengthened the roots of Armenian history and gathered us, nearly from opposite sides of the world for at least short but perpetual feel the magnitude of one suffering. The experience was memorable’.

Project Get Insight & Get Inside is organised by AKO Bürgerhaus Bennohaus from Germany and Centre for Strategic Research from Armenia. Project partners are: Volunteers Centre Skopje (Macedonia), Vega Youth Centre (Serbia), ESWIP (Poland) and Caucasus University (Georgia). The project is supported by the European’s Union Erasmus+ Programme.