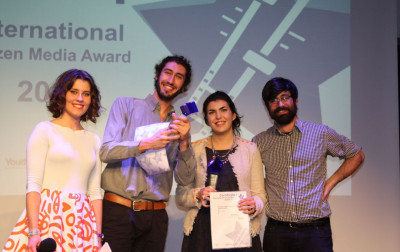 „Our world, our dignity, our future – sustainable development and engagement“, that was the motto of this years german and international citizen media award, which was awarded on the 12th of December 2015 in Bennohaus. How shall the community of our future look like? And what about global warming? Over 60 people working in citizen media applied to the prize and focused their audio and video submissions on these issues. The lucky winner did not only receive a trophy, but also 1000€ in prize money. Three participants in the category video and one participant in the category audio were awarded in both the german and international citizen media award.

Filmmaker Ayla Yildiz, resident in Bonn, was joyful to win the first prize in the category video of the international citizen media award. She was able to thrill the nine-member jury of experts in the field of television and radio with her documentation „I call it foodge – just as tasty, just as good“, in which she criticises the food industrie and the throwaway society, in which we live.

The first place of the german citizen media award even stayed in Münster. The editorial team of the science magazine „weit/winkel“ scored with their episode about sustainable development and alternative agriculture. They explained complicated terms like sustainable developement with wit and humour and interviewed local scientists, farmers and citizens of Münster.

Besides the winners of the two main prizes, Irina Samopjan from Serbia, Rafael Anton Garcia from Spain, Icaro Orengo from Italy, Masrur Jamaluddin Ahmad from Indonesia, Marie Baumann from Erfurt, Jan Philipp Dubbert from Mainz and Lisa Simonis from Hambug were also pleased to receive an award.

The award is presented by the Federal Association of Citizen Media and Media of Education e.V. (Bundesverband Bürger- und Ausbildungsmedien e.V), the Citizen Center Bennohaus (Münster, Germany), the European Youth4Media Network e.V, the Bundesverband Offene Kanäle and the Medienanstalten.