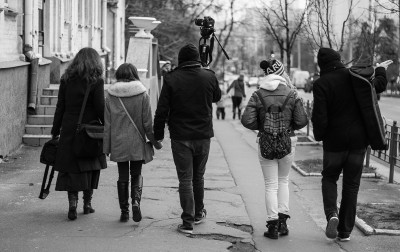 The last part of Citizen Media for Intercultural and Political Dialogue project took place from the 23rd till 30th of November 2015. Participants from Germany and Ukraine met together in Kiev to continue their cooperation and to take part in the final conference which summed up the project.

During last week of November 2015 young media trainers from Ukraine, with the support of experience teamers from Germany, lead the workshops concerning media. After the theoretical introduction about cameras and picture composition the groups created 4 products: a satiric movie about stereotypes, 2 video reports and an online blog. It is already the third time when young German and Ukrainian participants are meeting together. As one of them, Anastasia Russu, admits: ‘It was a wonderful experience for me. I am studying journalism and practicing with cameras is for me priceless. I hope to continue working on it and maybe even produce some films’.

It all started in June 2015 with the first meeting in Kiev, Ukraine where 20 young Ukrainians learnt from German trainers cross media: how to film, what a good picture composition is, how to write articles and how to edit. After the project, participants were practicing (filming, writing, producing) and finally they were ready to join the next training which took place in Münster and Ludwigshafen in October 2015 where they learnt how to be a trainer. That is the base for creating a media centre in Ukraine which gives voice to the community. The society and the situation in Ukraine are changing. German organisers of CMIPD project try to exchange with Ukrainians their experiences of community media and talk about political and cultural dialogue.

These aspects were the main issue during the final conference organised by Forum of Ukrainian Journalists – NGO from Ukraine. Special guests from the State Committee for Television and Radio Broadcasting of Ukraine, National Journalist’s Union of Ukraine and the German Embassy were talking about the need of independent media and the exchange between the West and the East of Europe. ‘The role of society and community media in Ukraine has to increase. Ukraine has a vivid society. It is really important to strengthen independent journalism there. The cultural and political dialogue between Ukraine and Germany is the key, for this reason German Ministry sponsored this project’ – admits Matthias Konrad the first secretary of the German Embassy in Ukraine.

During the last meeting in Kiev the leaders of the project: Joachim Musholt from AKO Bürgerhaus Bennohaus and Volodymyr Danyliuk visited the local TV station Espresso TV and the police station. They were discussing about the role of media in the process of informing society. Community has the law to know what is happening around them. Being cooperative and objective as a journalist will also help the police to do their work.

‘I am really excited to continue my work as a journalist and to give the voice to other people. New media trainers are a good base for the media centre to work and develop’ – says Volodymyr Danyliuk – the project leader from Ukraine. Now it is his turn to follow the tips from Germany and to make his media centre and Internet platform alive.

Citizen Media for Intercultural and Political Dialogue is organised by AKO Bürgerhaus Bennohaus from Germany and is coordinated in Ukraine by Forum of Ukrainian Journalists and Institute of Journalism from the Taras Shevchenko University of Kiev. The project partners are: European Youth4Media Network, OK Ludwigshafen from Germany and BvBam.

The project is supported by the Ministry of Foreign Affairs of Germany.

All the other information about the project you can read on the blog: http://ucmipd.blogspot.de/ and from a booklet published within the project.