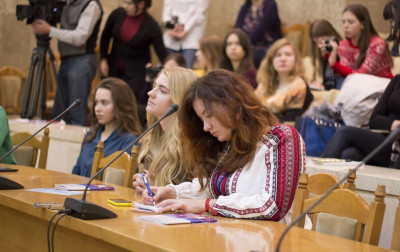 The final conference of Citizen Media for Intercultural and Political Dialogue in Ukraine took place in Kiev on the 28th of November 2015. Guests from Germany and Ukraine gathered in Taras Shevchenko National University of Kiev to talk about the last 6 months of the project.

CMIPD Ukraine is over. Organised by Forum of Ukrainian Journalists final conference was the last one from all the events of the last half a year of the project. The leaders of Bürgerhaus Bennohaus, OK Ludwigshafen and European Youth4Media Network met to present the content which has been done so far: 3 international meetings, films, photos, a web platform a booklet published recently. Volodymyr Danyluk, the organiser and moderator of the conference, says: ‚I wanted to focus especially on showing our work, what we did so far. It was also important that our participants, who joined all 3 trainings, will get the certificates. I really hope that they will continue cooperating with us and that we will build together our media centre and an active internet platform’.

Special guests accepted their invitations and visited the conference: Oleh Nalyvayko from the State Committee for Television and Radio Broadcasting of Ukraine and the honorary head of the National Journalist’s Union of Ukraine; and Matthias Konrad the first secretary of the German Embassy in Ukraine. They were both talking about media in Ukraine and how important the intercultural and political dialogue between the West and the East of Europe is. ‘The role of the society and community media in Ukraine has to increase. Ukraine has a vivid society. It is really important to strengthen independent journalism there. The cultural and political dialogue between Ukraine and Germany is the key, for this reason German Ministry sponsored this project’ – admits Matthias Konrad.

The project started in June 2015 and was organised by AKO Bürgerhaus Bennohaus, Forum of Ukrainian Journalists, Institute of Journalism of Taras Shevchenko University, OK Ludwigshafen and European Youth4Media Network. To read more about Citizen Media for Intercultural and Political Dialogue in Ukraine read our blog: ucmipd.blogspot.de