One year to build a media centre 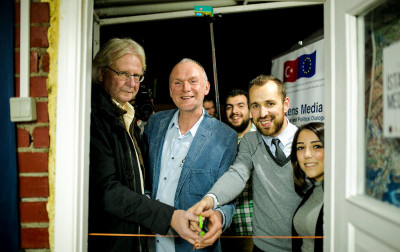 The fourth and the last training from Citizens Media for Intercultural and Political Dialogue project took place in Istanbul, Turkey between 8th and 16th of November 2015. Two German participants joined young people from Turkey to have a look at their work. Additionally, the project leaders from AKO visited Istanbul to officially open the community media centre and to take part in the final stakeholder’s conference.

It is already the fourth time when Youth4Media and AKO Bürgerhaus Bennohaus workers are meeting together with the volunteers of Youth Art (NGO from Turkey). The first meeting took place already one year ago, when the trainers from Germany were introducing the topic of cross media to young Turkish. Afterwards, participants from Istanbul had the opportunity to practise their skills during the local workshops. For the second and the third training in Münster, Germany they were already prepared for ‘Train the trainer’ seminar where they gained pedagogical knowledge.

One year after the first meeting, Germans came back to Istanbul and checked the skills of young trainers. This time they were responsible for preparing and leading the workshops for some other Turkish participants. The group needed also to produce a video. In that case, they decided to record a short movie which talks about an important issue for Turkey – a visa. What is interesting, the production is based on a scene from "Breaking Bad" – a popular American TV series.

Guests from Germany not only checked if young trainers are ready to train but also what they have done between the trainings and how their new media centre looks like. As Daria Jaranowska, the supervisor of the participants admits, ‘It was not only interesting but also emotional for me to see the development of my guys. One year ago I was teaching them media, then pedagogy. Now they have their own media centre and their own participants. Now they teach the others how I had taught them. It is a success for them but also for me’.

The meeting in Istanbul was the last one from the project – Citizen Media for Intercultural and Political Dialogue. For this reason on the 14th of November (in the end of the 4th training) the final conference took place. The event was organised by Murat Akbiyik - the president of YouthArt (a member of Y4M Network). All participants and media trainers were there to obtain their certificates. The project leaders introduced the audience the aims of the project and went through the last year of their work. Benedikt Althoff from Youth4Media – a project partner, admits: ‘Turkish together with Germans used creative multimedia tools to enable young people to voice their opinions on a variety of social and cultural issues such as fostering, understanding and promoting youth cooperation, civil society engagement and inter-cultural dialogue in Turkey’. The local NGO’s leaders and the representatives of Ministery of Turkey attended the conference . After the project input during this event all the guests were invited to visit and officially open the new media centre created by YouthArt in cooperation with AKO Bürgerhaus Bennohaus and Youth4Media. Murat Akbiyik cut the ribbon as a symbol of new possibilities which now are waiting for his NGO. As he says: ‘It was like getting the harvest of all the hard work we have had since the very first day we rented the office. It took quite a long time to make the space a workable media centre atmosphere, but at the end getting all those positive feedbacks from people during the opening was great. We were holding the scissors to cut the band for opening together with Dr. Musholt and Benedikt Althoff, and once again I felt that our collaboration is very strong and we can open new ways to our communities together! Istanbul Community Media Center is a very important milestone for us, but it is just a good start for bigger cooperations in the future...’.

Citizens Media for Intercultural and Political Dialogue is coordinated by AKO Bürgerhaus Bennohaus from Germany together with the partners YouthArt from Turkey and European Youth4Media Network e.V.

The project is supported by European Union and the Republic of Turkey, Central Finance and Contracts Unit, Turkish Ministry for EU Affairs