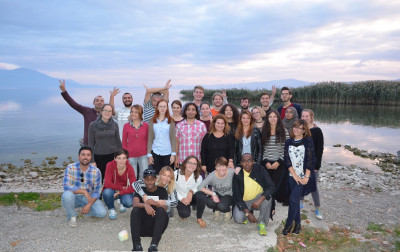 In small groups, the first sessions were processed to give us all a conscious approach to media. Both the team building activities, as well as "nation-mixed" accommodation strengthened the cohesion of the group and the intercultural exchange.

The "intercultural evenings” took place from Saturday to Monday, where each participant presented his/her own country which offered the opportunity to dive into other countries’ cultures for a short time, with the help of pictures, music, food and drink tastings and dancing together.

As the current project and the participants’ sending organizations were presented as well, and especially, as each group needed to present a media campaign carried out in their own countries, we learned a lot about the different political and social situations in Europe. Especially, as such kind of countries were also involved, where not really the “honest” and straightforward media is the popular one, many things have been addressed, about one normally might not make himself too many thoughts.

A trip to Ohrid - a town that is 15km away from Struga - (as well as the additional stay in Skopje as some of us had to wait for their flights), gave a little more insight into the life of local Macedonians.

The project was organised by Volunteers Center Skopje.