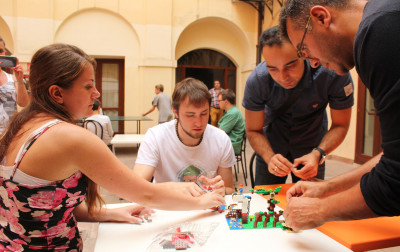 The city of Cagliari (Italy) has hosted the fourth meeting of the project “Mobile games in youth work”. Starting from September 28th and during seven days, the project involved several organizations from different European countries - with Arbeitskreis Ostviertel e.V. as the German partner.

This time, Italy was the selected country for the meeting. Orientare, a cultural association based in Cagliari, was one of the project coordinators together with the Student Computer Art Society (SCAS) in Bulgaria, which is the main coordinating organization and promoter of the project.

The objective of the mGames project is to develop competences of educators, teachers and instructors using mobile games for different devices (smart phones, tablets, etc.) in the youth activities. During the training course all the participant have been involved in several workshops in order to increase the capacity of youth workers and improve the non-formal education in the learning process. As Francesca Licheri said: “the non-formal educations is the learning that has been acquired in addition or alternatively to formal learning. It is also structured according to educational and training arrangements, but more flexible. “

The trainers and the leaders could test the new methodology for designing and implementing mobile games to use in youth work.

The program of the week was quite intense, various and substantially organized in different parts. First of all, it has been possible to deeply analyze all the benefit that could be reached by combining the classic education with interactive games. In this part, every group have had the possibility to show the research that they did about working with non-formal education in the areas in which every partners are now much more involved. Sharing research and different points of views was necessary to show to all participants the complexity of the topic that they were discussing and it also allowed to find out a new approach to look at the problem in a multitude of areas, competences and researches.

The theoretical approach to the topic was fundamental to build a basis for the practical part. Some of the main practical activities included workshops focused on design topics such as color palette analysis, interface development processes or storytelling construction. Development and design software was also present in the daily work. Two programs were especially relevant for the development process such Adobe Photoshop, and Unity 3d, a game development software. “We already knew some of the programs but it´s has been really interesting to use them for a different purpose: mobile games development.” says Rafael Garcia, one of the German participants of the project.

Participants could experiment with new methodology for designing and implementing mobile games to use in youth work through testing three mobile games developed for the project: Event Master, based on time and resources management. Green Skills, which is focused on developing recycling skills and Culture Trip, an interactive way to explore cultures and traditions around Europe. Every association showed also the mobile games that were developed in the frame of the project. Grzegorz Konopski, member of AKO organization, showed Trash Muncher, an example of a green skills mobile game developed by himself for this occasion. He explained: “It wasn´t easy to develop the game. After this week I have a better approach to developing mobile games. “

The project will finish with the final meeting in Krakow, Poland, next month where participant will attend several conferences and will share their conclusions and feedback for future projects.

MGames in YW is a project supported by Erasmus+ Programme of the European Union.