At the foot of Ararat 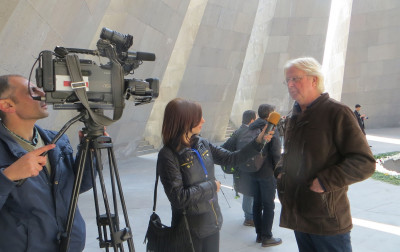 In his function as chairman of Youth4Media Dr. Joachim Musholt travelled to Armenia at the end of March (18-20.03) to take part in an international media forum. He had been invited by the partner organisation of Youth4Media, the Centre for Strategic Researches.

Around 150 journalists from all over the world came to Yerevan to take part in the conference “At the foot of Ararat“ and to discuss the genocide that took place 100 years ago, at the 24th of April 1915.

This date builds the most important day of mourning for the Armenians, a date on which more than one million Armenians of the intellectual, political and cultural elite have been started to be deported and murdered in Constantinople.

The forum, in which beside journalists and media experts from 34 countries important persons from science, politics and society took part, was held under the principle “I remember and demand”.

For three days the participants discussed and listened to several lectures concerning the genocide, for example of the president of Armenia, Sersch Sargsjan and several ministers. “In 2015 Armenians all over the world commemorate the genocide which has killed so many people. Every Armenian in every corner of the world still feels the consequences every day – in psychological, cultural, linguistic or political ways”, Sargsjan declared.

On March 19th the participants were received by His Holiness Karekin II Nersissian, Catholicos of All Armenians in Echmiadzin. He expressed his hope that all nations would acknowledge the genocide as what it was so that something like this never happens again.

The goal of the event was – beside building an open platform –  an active debate among the participants. On the last day all participants adopted a declaration to acknowledge the genocide.

“We as Germans are under duty to deal also with the genocide of the Armenians, that is why in the future Youth4Media will launch new projects with the Armenian partner”, Dr. Musholt declared. Plans for a new project with the Centre for Strategic Researches and the Armenian Genocide Museum have already started.