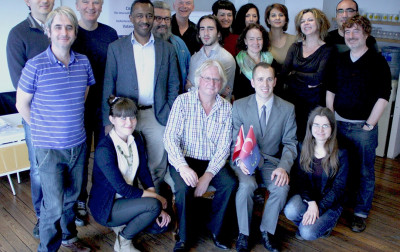 On November 15th this years’ annual general assembly of the European Youth4Media Network e.V. took place in Istanbul. The cooperation between twin cities of Münster initiated by Bennohaus formed a network of international organisations. The chairman and leader of the Bennohaus, Dr. Musholt, made up a positive balance.

A lot of projects could be archieved in 2013/2014. One of the most meaningful projects was the production from the youngsters of the twin cities Lublin, York, Orléans and Rjasan. The project was connected with the 100 anniversary of the beginning of the World War I. Also a venture of young people and seniors from Münster and Rishon LeZion raised a cheer as well: Survivors of the Holocaust revived old Yiddish songs. Young Germans and Israelis interpreted it and created their own modern version.

The annual general assembly in Turkey was embedded in the project “Dialogue between Turkey and the EU” by Arbeitskreis Ostviertel e.V., its goal is the infrastructual establishment of citizen media at Turkey.

The project is financed by the EU and the turkisch government. It is framed by seminars for media-producing multipliers in Münster, Istanbul and other learning partnerships.

The president of European Movement Germany, Bernd Hüttemann, traveled to Istanbul to express his support. Dr. Musholt, chairman of the Bennohaus, wants to involve the integration council in upcoming activities in Münster. Concerning this matter he had an informative talk with its chairman, Dr. Ömer Lütfü-Yavuz. In 2015 there will be festivities due to the 20th anniversary of European projects at the Bennohaus.