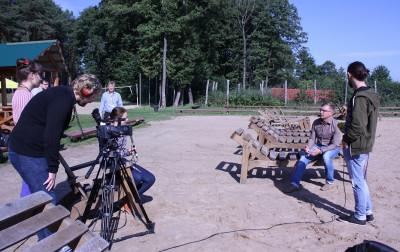 In a cross-border cooperation with the Polish non-profit organization ESWIP the Citizen Centre Bennohaus (under the sponsorship of the association Arbeitskreis Ostviertel e.V.) accompanied a seminar about "New Media and Citizenship" in western Ukraine in the end of August 2014. Qualified media trainers and designers of the Bennohaus conveyed skills in video journalism and public relations to students and future journalists.

Together they created a web blog and a film documentation. Further topics of the five-day project were lectures and discussions about the future of media and citizen media in the individual countries of the participants and in Europe. For this purpose the organizer, the "Forum of Ukrainian journalists", invited numerous journalists and government representatives from the region.

The European Youth4Media network also took part in this project by introducing its work and aims to the participants. The main focus was set on a greater participation in political processes and the promotion of public relations and press freedom of the eastern European civil society. "The interview with fugitive journalist Oleg Dscholos from embattled Donetsk impressed me the most," declared Tim Noetzel one of the praticipants. In an one-hour debate
participants and journalists discussed, also due to the current situation in Ukraine. "We are very pleased that we were able to complete this project and also the hosts were grateful that we have shown our solidarity in such a difficult situation,"summarized the CEO of Bennohaus and chairman of Yoth4Media, Dr. Joachim Musholt.

For the future, further meetings are planned. The project is supported by the Foundation for German-Polish cooperation.