Time to say Goodbye - the final conference in Kyiv 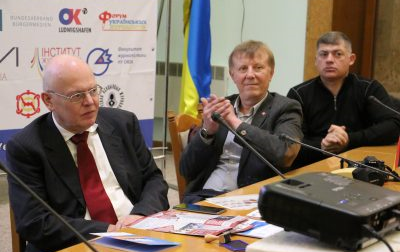 Five hard working days - and the results are visible. The project Media Dialogue for Democracy and Peace has come to an end!

The third stage of the project took place in Kyiv Ukraine. During five days participants had a chance of visiting different TV and radio broadcasters in Kyiv, interviewing people, filming about different topics.

Wolfgang Ressmann, managing director of OK-TV Ludwigshafen, presented the ideas and goals of the project. He said that the idea of the project is to support post soviet republics, particularly Ukraine, Armenia, Georgia in developing democracy, the media system, independent journalism and to bring them into “European House”. He also spoke about conflicts and wars in the mentioned countries: “One of the most important things in the states and their democracy is the press. The free press and freedom of press are basics that we need for developing democracy and developing the countries”.
During the project a network was created between universities in Ukraine, Armenia and Georgia. Wolfgang Ressman also spoke about the previous stages of the project in Lutsk, Tbilisi and Yerevan.

The conferences continued with the speech of Volodymyr Runets, correspondent of the TV Channel Nastoyashcheye Vremia, Radio Free Europe and Radio Liberty. He briefly presented the current situation of journalism of Ukraine. He mentioned that journalists, covering news about conflicts, war in Donbass should take into account one very important thing:  the responsibility of their job. He also told the audience that in April 2014 a Kalashnikov machine pistol was pointed on his head. Then he understood that the journalism in his perspective would never be the same as it was. While covering war and military conflicts journalist face a lot of challenges, like fake news, propaganda, hostility and also safety and security challenges. Volodymyr Runets said that conflicts and war are very sensitive themes and that is why  journalists should be very accurate when they write or report on those topics.

Serhiy Tomilenko, the head of the National Union of Ukrainian Journalist, presented the main directions of the union: One is the protection of the rights and the other one is professional development of journalists. He talked about the current situation of journalism in Ukraine and mentioned that it is actually a dangerous profession because there is a high risk of physical attacks towards journalists. He said that the attempts of physical attacks in Ukraine never drops under 80 per year. Last year 86 attempts of physical attack against journalists occurred in Ukraine and in 2017 the number of that kind of incidents reached 89. The National Union of Ukrainian Journalists provides legal support to journalists and the union represents journalists’ interests towards the government. He also mentioned that media in Ukraine are often used for political aims and politicians divide the media into good and bad - pro-Russian and pro-Ukrainian. That creates the background for the limitation the of freedom of speech. He summarized his speech by wishing good luck to the project Media Dialogue for Democracy and Peace project.

Volodymyr Danyluk, the head of the Forum of Ukrainian Journalists, stated that in the frame of the project important results have been reached. One of the most important things is that the project helped young journalists to gain practical experience. They learned about working effectively in journalism and they achieved knowledge that they will use in the future. At the end he thanked the Ministry of Foreign Affairs of Germany for financing the project and expressed hope that the project will be continued.

Mkrtich Tonoyan, the head of AKOS Cultural NGO based in Armenia, spoke about art as media. He mentioned that literally speaking art itself is media because in different ways it always has a message that gets delivered to the audience. He also stated that on the other hand not all media and digital products can be considered as art, its becomes art when it is declared and experienced as art. Mkrtich Tonoyan also brought some examples of art like movies, pictures that were used as art works.

After the speeches a short movie was shown. It was made by Vladyslav Bobrun and Mariia Dereviahina, journalist from Donbass. They had participated in earlier stages of the project and present the goals and expectations of the project in the video. They presented the “journey” that the project has passed.

First was the debate group. The group’s members chose the topic “journalism and democracy”. The participants tried to find and present the role of media in conflicts and how media affect the making of a conflict. Irina Mugdusi, one of the participants of this group from Georgia, stated that during the project they had a chance to achieve new knowledge and share their experiences with others. She mentioned that the participating countries are affected by armed conflicts. So it is important to find a peaceful and democratic way to solve those problems. Irina Mugdusi said that the project first of all helped them to recognize how important democracy, peace and freedom of speech are for societies. And they also understood the significant role media play by covering information about armed conflicts.

A participant from Ukraine, Eugenia Marchenko, mentioned that nowadays media play a major role in many aspects of our lives from daily routine to political processes. Since media is an important actor in democratical political systems, the role of media can be used both in good, and bad terms. The participants presented some examples of what role media play in political situations and in conflicts in Ukraine, Armenia and Georgia. They also spoke about the challenges and dangers that journalist could face during their work on conflict and war topics. They also prepared and presented a survey about the media's role in conflicts, influence of fake news, etc.

The first video group presented a short video about Detector Media, an organization that monitors and analyzes media outlets in Ukraine. Gustav Spahn, the group’s trainer, mentioned that it was very interesting for them to get acquainted with the process of monitoring media outlets and how people work at Detector Media. It is important because it can help to avoid fake news or control and try to find fake news. The video will soon be uploaded on YouTube and every one will have the chance to watch it.

The topic of the second video group was pressure on journalists from state authorities. The participants met and interviewed people who work in the field of journalism in Ukraine. The interview partners told them about the pressure from the government. This group also asked some people in the streets about the kind of media they use, whether they truste the media or not. The film is not totally finished yet. It will be finished and put on YouTube as well.

The conference ended with the ceremony of giving certificates to the participants and taking photos. But there was also a surprise: Volodymyr Danyluk brought post stamps with the project’s logo. They can actually be used for postcards and letters.