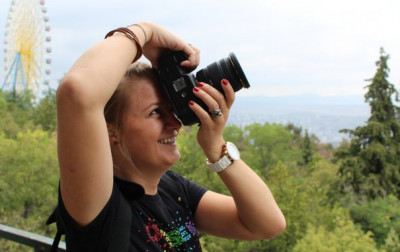 So many amazing places to see but so little time to explore everything. Especially when you are in such a historic city like Tbilisi. On the last day of the project Media Dialogue for Peace and Democracy the participants explored the city’s main sights with the help of a Georgian guide.

The tour started with Mtatsminda Amusement Park. It is a famous landscaped park located at the top of the mountain overlooking the capital Tbilisi. The park is situated at a height of 770 meters, the highest point of Tbilisi. The park was founded by the Soviet government in the 1930s and was once noted as the 3rd most visited public park in the USSR. Later a Georgian billionaire owned the park as a charity project and started to transform the park into a 21st century theme park. There is a giant wheel located, funicular ropeway and a splendid view of the city.

The project members have also visited the Holy Trinity Cathedral of Tbilisi, commonly known as Sameba. Which is the main cathedral of the Georgian Orthodox Church. Constructed between 1995 to 2004  it is the third-highest Eastern Orthodox cathedral in the world and one of the largest religious buildings in the world by total area. Sameba is a synthesis of traditional styles. Georgian church architecture at various stages in history dominate but there are also some Byzantine undertones. The construction of the church was proclaimed as a “symbol of the Georgian national and spiritual revival” and was sponsored mostly by anonymous donations from several rich people and common citizens.

Finally, the integral part of Tbilisi city tour is “old Tbilisi” which is principally referred as Tbilisi historic district. Due to its significant architectural and urban value, as well as the threat to its survival, it was previously listed on the World Monuments Watch. It chiefly represents a 19th-century industrial city with largely eclectic architecture which includes the buildings and structures from the 5th to the 20th century. However, most of the pre-19th century city did not survive due to the devastating Persian invasion of 1795. The district houses a bulk of the tourist attractions in Tbilisi, including churches, museums, Sulphur bathhouses, and peculiar wooden houses with open, carved balconies. From old Tbilisi you have a magnificent view of the river Kura that divides Tbilisi in two parts and the bridge of peace which was designed by the Italian architect Michele de Lucchi in 2010.  The bridge was ordered by the City Hall of Tbilisi to create a contemporary design feature connecting “Old Tbilisi” with the new district.

The participants of the project were amazed by the synthesis of modern and historic parts of the Georgian Architecture. They enjoyed Georgian culture and traditions which can be easily seen through the hospitability of the people.