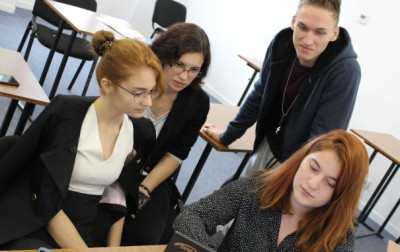 In this article you can learn more about the working groups of the project Media Dialogue for Democracy and Peace. We followed the different groups and talked with them about their working process. We also interviewed Wolfgang Ressman about the results and perspectives.

Often when we talk about videos or when we watch a video we are not aware that for making a high quality video huge efforts are needed. It requires really hard work.
First you have to think about the right topic. The video group discussed about Georgian media and its problems. They decided to make a report about the independence of Georgian media because it is one of he main issues today.

The next step is recording: The group made a survey on the streets of Tbilisi. They asked local people what they think about media independence in Georgia, what the main information sources here are, what TV channels they watch, if they compare the informations they get. They also interviewed the members of the debate group to know their oppinions about this problem.

Then the materials have to be edited to complete the work. This is what the video group is doing right now.

One of the most important parts of the project is the debate group which is responsible for the presentation about current media and political issues. The group members had a discussion and searched some core topics and problems which are common for all participating countries.

Their main topic are conflicts. Firstly, they discussed how armed conflicts create situations which lead to a lot of problems in Georgia and in Ukraine as well. Secondly, they talked about the reflection of conflicts in media. This is a crucial point because it shows people how media work in reality. The last point of their work was national language as a conflict maker. The participants gave an example of Ukraine, especially, what a big role the Russian language plays in this country. These topics are very current and participants agree that they are problematic and important because we are confronted with them every day.

The two presentations should take around 15 minutes and after them there should be time for questions and debate. Now everyone is working on his own on his topic.

He says, the main aim of the project Media Dialogue for Democracy and peace is to support the development of democratic media in the participating countries Georgia, Armenia, Ukraine and Belarus. The project should establish cooperatation and raise awareness for each others problems and ongoing processes. Furthermore, it purposes to help in solving local conflicts as well as informing internationallz about the frozen conflicts in the participating countries. An improved media system like this helps preventing of international conflicts.

Caucasus University is one of the main partners of the project. Wolfgang Ressmann says that it is also important for the project to help students and the young generation to achieve new experiences within the frames of Media Dialogue for Democracy and Peace. It also helps organizers as well as participants to create new contacts and to broaden their horizons in the problem solving processes. Besides, Wolfgang Ressmann talked about the expectations and further development of the project which is funded by the Federal Ministry of Foreign Affairs of Germany and will inform the ministry about the results of the project.

Wolfgang Ressmann says that it is an aim to deepen and widen the cooperation with Georgia and Caucasus University and the other participating countries and organizations to achieve common goals together.