The Final Conference in Volyn 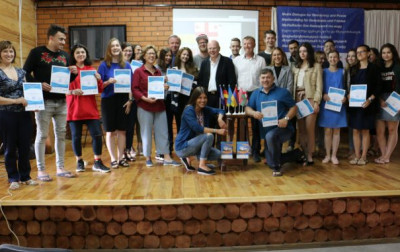 It was a week full of impressions and hard work: the first stage of the project Media Dialogue for Democracy and Peace. And it took place in the city of Lutsk in western Ukraine. For the final conference the participants went to the lake of Svityaz which is located in the countryside close to Lutsk.

Volodymyr Danyluk opened the conference. He is the chairman of the Forum of Ukrainian Journalists. He told the audience that he appreciated the participation of the different delegations in the first stage that took place in his city. After him Wolfgang Ressmann, chairman of the Association of Citizen Media of Germany, talked about his impression from the project’s first stage and the time we spent in Lutsk. He also summed up the results of the debate group’s meetings and discussions. Then Lina Kushch, the First Secretary of the National Union of Ukrainian Journalists, emphasized that this project is very useful for Ukrainian journalists because it provides an exchange of experiences. Yurii Hromyk, the decan of the Faculty of Philology and Journalism, said that he was very happy to host the participants in the Lesya Ukrainka Eastern European National University in Lutsk. The representative from the Institute of Journalism from Taras Shevchenko National University of Kyiv, Katerina Sokolova, underlined the importance of the networking that the project enables.

After the introduction the video groups and the documentation group presented their results.
The first video group showed their report Ukrainian & Russian – Is the language a conflict? The group tried to find out how the usage of these two language in Ukraine affects the people’s everyday life. To find out more they made a street survey and interviewed people from the west and the east of Ukraine.
The second video group’s report is about the NGO FRI that operates in different cities in Ukraine and is also active in Lutsk. The video group visited the NGO in its office and did interviews there.
The participants of the debate groups also presented the results of their work. There were presentations about the Georgian and the Ukrainian media system and their challenges.
As the last group the documentation group presented its results. They focussed on writing articles about the work of the other groups. They published these articles on this blog here together with some photos they took. Then they shared the content over social media (Facebook and Instagram) to reach more interested people. The participants also told the audience what they learned by working on articles and the blog.