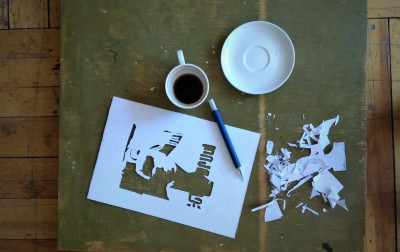 How to combine traditional art with the new media? An example of the answer for this question can be the MediArt project, which took place in the end of March (20-28.03.2017) in Yerevan, Armenia. The youth workers’ training course was organized by the European Youth4Media Network from Germany and the Centre for Strategic Research from Armenia together with the partners from Poland, Georgia and Ukraine. The main goal of the project was to express the thoughts about social justice through traditional art and new media.

Are the youth still interested in traditional art? Would they like to paint the landscapes or maybe making a snapchat on their smartphones. Is this enough to feel like an artist? In the era of new technologies it is hard to catch the attention of the current generations. We already had the examples of visits to the museums just because a Pokémon appeared there. Did all of the youth exchange the paint brush for the graphic tablet already? Definitely not all of them and both ways are surely important. That is why Youth4Media decided to combine traditional art with new media in one project. The German project coordinator, Agnes Horvath, says: “Participating youth workers developed their competences in the field of video-making, arts and their combination, which enabled them to support young people in non-formal activities, focusing on social justice and engaged them in the awareness raising process”.

Participants of MediArt were divided into 4 groups: I - contemporary art, II - video report, III - short film, IV - animation. Each group had a task to produce a product, which will express the thoughts about social issues (especially social justice). This is how the first group created an exhibition of the print stumps combined in a newspaper, the second group prepared a video report about the situation of refugees in Armenia, and finally the third and the fourth groups produced shorts films about changing perspectives on the issue of women’s and men’s roles in the society.

The highlights of the projects were evenings during which participants could try the dishes from the partners’ countries or move to the rhythm with the Armenian traditional dancers.

Visiting the Armenian carpet factory kept the attention of the participants on the ancient art of manufacturing. As Beata Jaranowska, one of the participants, admits: “I’ve never expected that a simple carpet can be a piece of art, until now. I could see with my own eyes how the carpets were sewn thread by thread. The variety of patterns is really impressive’.

Media, art, animation workshops and getting to know the local culture and history let the participants develop their skills and broaden their knowledge. “In this project we transmitted the traditional art through media into the current world. One of the oldest cultures in the world, the Armenian culture, which Europe embossed, was changing over the years and finding the new ways of existing. Thanks to that it exists strong in people’s lives. Who is forgetting about the past, will not have a future – somebody said. The will of existence of the Armenian nation is an example for the new generations” – sums up the chairman of the European Youth4Media Network e.V., Joachim Musholt

MediArt was organized by the European Youth4Media Network e.V from Germany in the cooperation of the Centre for Strategic Research from Armenia, Caucasus University from
Georgia, Forum of Ukrainian Journalists from Ukraine and Centrum Wspolpracy Mlodziezy from Poland.

The project was funded by the Erasmus + Programme of the European Union.