Much more than a project in Thessaloniki 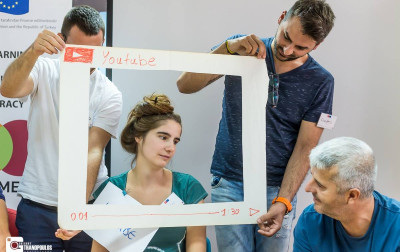 "Can I ask you something...? What are we going to do in Greece?", Andres asked the first day. The German team was in the middle of the hotel lobby waiting for the organisers of the second international Learning Media training course, in Thessaloniki. "We will meet the other participants from Greece and Turkey and together, we will learn how important media is in our life and how we can create it", one organizer answered.

The participants took their cameras and small bags full of emotions (and summer clothes) and started their journey to Thessaloniki situated around four hours and a half, and more than 2000 kilometres from Münster to attend the project about Media Literacy.

Over fifteen participants and four coordinators met in one office in the capital of Greek Macedonia. "We will start with a game. Here we have the most used social media apps, like Facebook, YouTube or Skype. You have to become the own social media and explain us why we are using you", was the beginning of the training lesson. And this is how the participants started to understand the importance of media nowadays, how essential communicating in a positive way is and why we share or make some information viral. For example, while working in groups the participants did a hoax video trying to sell a magic bottle of water with no limit, to find out that sources are really relevant to choose.

Gregory Thanopoulos, member of the Greek team, confirms that projects like this once again prove the importance of youth exchanges. Bringing together people from different countries and backgrounds is what makes your mind expand and include everyone. The value of this experience is something unquestionable.

With introducing games, videos and our own ideas, these fifteen participants spent one week discussing and learning. Moreover, they also went out from the office and visited the national television studios ERT3 and The Cinema Museum of Thessaloniki. Saturday the group had an intense day of conference while they were working in different groups of video, photo and journalism. "We spent the whole week recording and taking pictures, but during the conferences we really worked as a team and we could bring into being what we were talking about during the week", says Arda Güney, member of the video and Turkish group.

The conference was focusing on many various topics, for instance how hard the situation of ERT3 was when they had to spend almost two years working without incomes, because the government tried to close the studio. "It was really emotional when Eleytheria Farantaki told us that she was working 16 or 18 hours per day with her husband just to bring off the public television", one of the German participants, Andres Rodas, said after the conference.

But this is not all. The Turkish, Greek and German group had the chance to meet people from those countries, seven days to understand their cultures from their point of views and check with their own eyes how Greek life is and how similar all can be, even coming from diverse countries. Some of the members tried dancing to traditional music from different cultures. The fifteen participants laughed while learning the sound of a duck depending on the country and shared their personal stories. "For me, the best part of the program was feeling how is the life of the people who live in Thessaloniki. And we could have experienced that while walking around the city, going outside for lunch and dinner and asking about everything we saw on the street", the impression of Beata Jaranowska from the German team.

This international event is not only a theoretical way to learn about media, it's an intercultural long project which started a few months ago in Istanbul, Turkey; now it was Greece's time and then Münster's. So the German group will have the opportunity to share its culture, lifestyle, language and food with the participants, and keep promoting this kind of cultural projects.

The Learning Media project is organised by the YouthArt from Turkey together with the partners European Youth4Media Network from Germany and Media TerraNea from Greece.

The project is supported by the European Union and the Republic of Turkey.

The first part of the project took place in Istanbul, Turkey.