Let’s kick it off! – Project “Learning Media” is officially ON 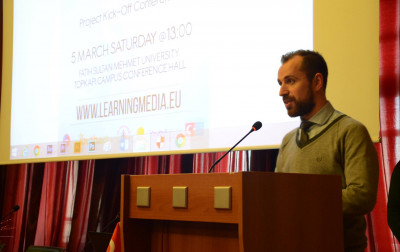 We are happy to announce our new international project “Learning Media”, a cooperation between Youth4Media, the applicant organisation YOUTHART from Turkey and MediaTerraNea from Greece.

On 5th March 2016, the project “Lifelong Learning for Digital Inclusion through Media Literacy” (shortly: Learning Media) had officially started with its kick-off conference held in Istanbul, Turkey. Mr Murat Akbiyik, president of the applicant organisation, YOUTHART introduced the project to the audience, which is aiming to:

Representatives of educational institutions and non-governmental organisations served with valuable inputs for the previously mentioned topics during the 1st conference of the project. Youth4Media manager, Benedikt Althoff presented the networks’ daily work on local, national and international level, while Agnes Horvath referred to the activities of the network, which are primarily targeting the digital inclusion of young people.

Meanwhile, the first international training course had been also implemented in Istanbul, with the participation of 5-5 youngsters representing Turkey, Greece and Germany. All articles and multimedia products created by the young participants will be available soon on the project’s official website: www.learningmedia.eu

The project is funded by the EU and the Republic of Turkey within the Civil SocietyDialogue Programme Education Grant.